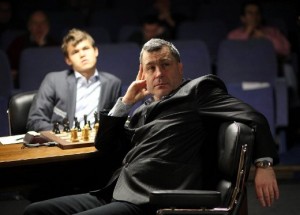 Four very interesting match-ups are taking place in London. Both leaders, Carlsen and Aronian, are playing with black against very motivated opponents. The players are putting forth some uncompromising chess, looking for ways to raise in the standings.

Vassily Ivanchuk is playing with the white pieces against Magnus Carlsen. The Norwegian went for a Gruenfeld Defense, probably expecting a sharp battle where Ivanchuk’s problems with time management might come into play. The variation played favored white, who by move 17 was a pawn up. The endgame that arose is very hard to convert into a full point, especially if we consider Carlsen’s ability in the technical phase of the game. Ivanchuk has less than 2 minutes to make 11 moves.

Vladimir Kramnik used the Reti opening against Levon Aronian. Clearly, the Russian avoided long theoretical lines that might take the game to a drawn position. Instead, Kramnik went for lines that take the battle to the middlegame. After 30 moves, Aronian is a pawn up, but in exchange, the ex-world champion has the bishop pair, a very active rook and a better pawn structure in the center.