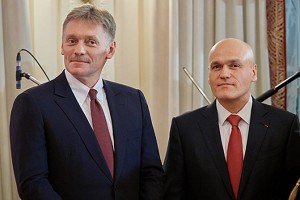 The ongoing Glen Stark affair continues to have repercussions in Russia. The head of RCF Andrei Filatov said in an interview for Tass.ru, “At the congress of the supervisory board of the federation that took place in Sochi, Kirsan Ilyumzhinov presented in details his program and a ticket […] which we decided to support.” Filatov continued, “[…]if the ticket changes, we can refuse support.”

This brings back to the table the question of who Glen Stark is, as his CV in Russian, his fake stock image photo and automated profiles, and his bizarre website continue to puzzle everyone who follows the FIDE chess elections.

The Russian government was just formed and Filatov noted for Tass that the Russian Chess Federation will discuss with the Ministry of Foreign Affairs the bid of Kirsan Ilyumzhinov as candidate for the FIDE elections 2018-2020 that will take place during the Chess Olympiad 2018. This meeting is expected to happen as soon as possible. Read the full Tass article here.

More about the FIDE elections

The FIDE election story so far