Ralf Åkesson was the last Swedish winner of the Rilton Cup, having won the event way back in 2003/2004. Is it finally time for a new Swedish victory in Rilton Cup?

“Evidently it’s been many years since the last Swedish victory which only proves it is quite difficult to achieve it. In order to win I would really need to have a brilliant tournament. Anyway I can only do my best and see how it goes”, says Erik Blomqvist. 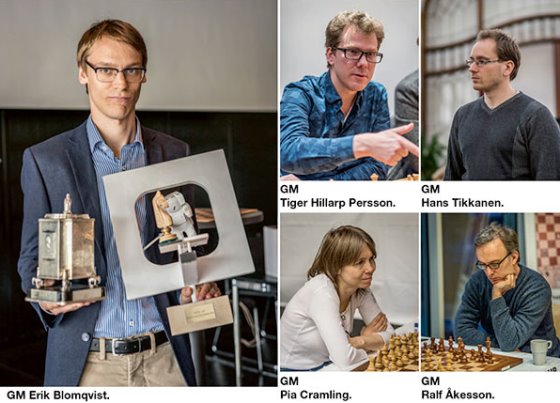 Both Erik Blomqvist and Tiger Hillarp Persson have been in excellent shape the last two editions of Rilton Cup.

The question goes to Erik Blomqvist: You have had a good score in Rilton Cup last two years. 7th place 2014/2015 and 3rd place last year. How do you explain your strong results in Rilton?

“I have played in Rilton Cup many times and over the years I’ve had some good results as well as some disastrous ones. As you mention the last years it’s been getting better and hopefully it will continue this way.

The fact that the tournament takes place in my hometown makes it special and also a bit different. Unlike when playing most other tournament you live at home which could be either an advantage or a disadvantage. It is probably a good thing to have played the event before and being familiar with the surroundings and so on. On the other hand I sometimes feel going away to a tournament helps you focus solely on chess.

Anyway I am always happy to take part in Rilton as it is an excellent opportunity to play against international competition on home turf.”

You became the national champion this summer. How would you express your feelings after the victory?

“It was a very pleasant feeling obviously. Clearly it was one of the best achievements in my chess career.”

What has happened in your chess career since the Swedish championship?

“I have played a few tournaments with mixed results. It was a nice experience playing in the Olympiad for the first time even though the Swedish team didn’t do particularly well.”

How do you prepare yourself for Rilton Cup?

“Usually I don’t look at much chess at all during Christmas and the days leading up to the tournament. As soon as the tournament starts I will take it quite serious of course.”