The First Mongolian Nations Chess Tournament started today on 14 March 2016 in the capital of Mongolia Ulan Bator. It will be round robin tournament (men and women sections) where 4 Mongolian players and one representative from each country (Inner Mongolia, Republics of Tyva, Buriatya and Kalmykia) will participate. 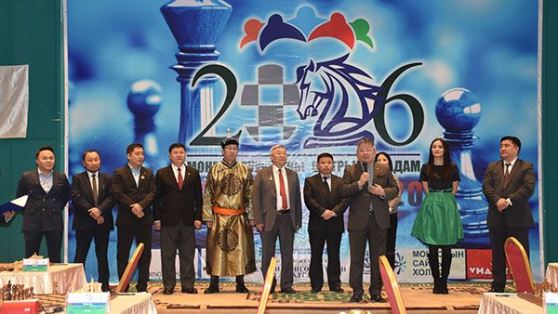 On 14 March the technical meeting took place in the Conference Hall of Chinggiz Khan Hotel. The Vice President of the Mongolian Chess Federation, a member of the World Mongolian Nation Association, Mr. Purev Zhigzhidsuren greeted all the participants and introduced the organizers, arbiters and players. He thanked all the participants to have agreed to take part in this chess event, which has a very important impact on the popularization of chess in Mongolia and helps to develop sport relations between Mongolian nations.

The Chief Arbiter of the tournament Mr.Zhambaldoo Lhagva has gone through the main points of the regulations and made drawing of lots. Every participant was presented a chess book with a number according to which they start their first round.

The Opening Ceremony started before the first round. The member of the National Parliament Mr. Demberel was a distinguished guest of the ceremony. He took a floor to congratulate all the participants from many regions and countries who came to participate in the tournament of the Mongolian Nations. He said that he was very proud that Mongolia again hosts an international event and this time it is a chess competition. 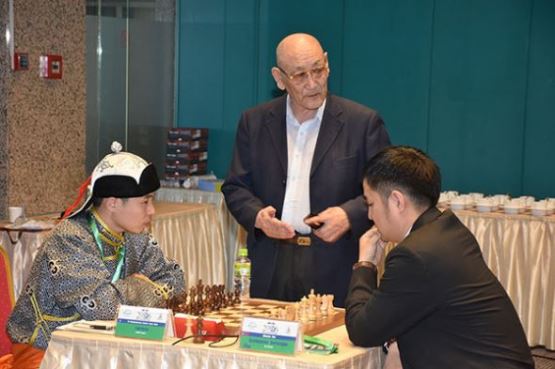 Members of the Mongolian Chess Federation, members of the World Mongolian Nations Association, other honorable guests were present at the Opening Ceremony. The representatives of Tyva Chess Federation presented souvenirs to the organizers, expressing their sincere gratitude for organizing the competition for Mongolian nations which would, to their mind, make a considerable step towards the development of chess among Mongols of the world.

When the official part of the Ceremony was over, Round 1 of the competition started. 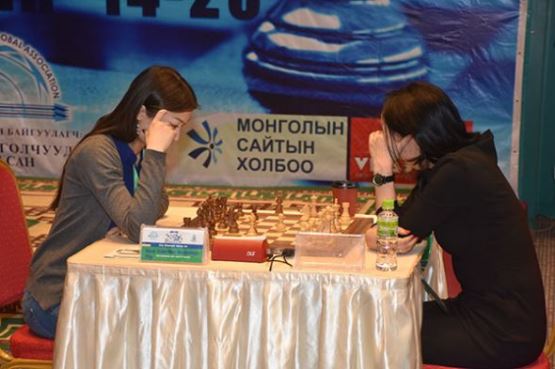 Round 1 of the First Mongolian Nations Chess tournament

Round 1 of the First Mongolian Nations Chess tournament did not bring any surprises. Let’s have a look on what was going on in the men’s section.

Men’s section of the tournament can be proud of having three Grandmasters, one FIDE and one International Master participating in the event. Three unrated players would need more energy, preparations and concentration to compete with their titled rivals. But let’s see what will happen then. As for Round 1, there were three wins and one draw.

So, the first game was finished rather quickly. The Mongolian Grandmaster Bachulun Tsegmed (2460) has outplayed his unrated opponent from Inner Mongolia Gantogoo. It is worth to mention that the chess player from Inner Mongolia came to a round in a national Mongolian dress. That is what I have never seen in any chess competitions before. We asked both of the players on their impression on the first round and the organization of the tournament in general:

Tsegmed: First of all, I would like to say that the tournament itself has a great meaning: best players from Mongolian nations from all over the world gathered together to compete in the competition. I think it happens for the first time. I am very happy to take part in this great event.

Though my first opponent is an unrated player, I must confess he is a very strong competitor. Of course the game went on easy for me. But I felt that it was not easy for him, though he was defending very well. I wish him success.

Gantogoo: I would like to thank organizers for such an outstanding competition. It is my first time I play in an international chess competition. I started playing chess not so long ago, but I like this game and I am very happy to have a chance to play against such strong chess players.

The conditions here are fantastic. Nice hotel, good food and amazing playing hall. Moreover the chess atmosphere around makes me happy. Definitely it is very difficult for me to compete with such famous and strong players. For instance today I lost. But I hope I will play tomorrow.

Well, the first game was kind of what we expected to have. Let’s see what happened on other boards. The Tyvan Salchak Dolaan (2149) could not manage to lead his game to a win against his competitor from Buryatia Zhamsaran Tsydypov (2425) though he had one piece up. Here is what they said after the first round:

Dolaan: This is my first time in Ulan Bator. I liked the city from the first moments I entered it. The idea to gather the nomadic nations in one international chess tournament and to define the best player among these nations is very good. I would also like to underline that the organizers did fantastic job: the playing conditions are great. The chess equipment is up to date. It is pleasant to play chess here.

As for today’s game, we made a draw. Being neighbors, we made a decision to start with a friendly draw (smiling). But the game was very interesting. In the end the pawn structure did not let me win the position.

Zhansaran: This is my fifth time in Mongolia, but first participation in such kind of tournament. I would agree with Dolaan, it is good idea to define the strongest out of our nations. As for me, it would be good to know where my position among players from nomadic Mongolian countries is.

The game was interesting indeed. We had mutual sacrifices. Frankly speaking in the beginning I had a winning position. Later on, I over played at some point and blundered. It seemed that black had more comfortable position with a piece up. But I managed to keep it to a draw.

Another game finished in favor of the Mongolian FM Gan-Od Sereenene who outplayed his unrated compatriot Bat Ochir Ulzibat. The latter player seemed not very upset about his loss, and shared with us his impression on the tournament in general:

Bat Ochir: I like this tournament very much. Imagine, all Mongolian nations came to participate in the competition. For me it is a great opportunity to play against such strong players, International Grandmasters. For instance this round I played against GM from Mongolia Gan OD Sereenene and I lost unfortunately (smiling). It was very difficult for me. There is not a single weak player here. So, I guess it would be a very tough tournament.

The last board of the Round 1 was a battle between two Mongolian Grandmasters: GM Gundavaa Bayarsaikhan (2517) vs Khatanbaatar Bazar (2375). One of the leading Mongolian chess player Gundavaa won his first round. We asked him on what he thinks about the tournament in general:

Bayarsaikhan: Some years ago some famous Mongolian politicians and social people invented an idea of uniting Mongolian nations in cultural sport events. So, this time the World Mongolian Nations Association continues and supports this movement. I like it very much. This way we first of all will develop chess movement among Mongolian nations and increase the level of play of our chess players.

Though the level of the tournament, in respect of the team composition, is not very high, but the idea to start organizing competitions only for Mongolian nations is very good itself. I hope that next time maybe other strong chess players would join this competition. As you know, we have Sanan Sjugirov of Kalmyk Republic as number one among Mongols of the world, Anton Shomoev is second in the Mongolian world, and I come third. Let’s hope that next competition will gather many more strong players.

As for my first round, I won it against my compatriot. I had a slightly better position from the opening and led it to a win.

Well, let’s wish to all the participants of the First Mongolian Nations Chess Tournament good luck. And the impressions on the organization from the ladies of the tournament come in our next report.