The First Move of the 2014 Tradewise Gibraltar Chess Festival at The Gibraltar Masters tournament took place this afternoon at the Caleta Hotel.

At precisely 3pm (Gibraltar time) James Humpreys, Chairman of Tradewise Gibraltar Insurance Ltd, the main sponsor of this event made the first move on the top board against top seeded player Grandmaster Michael Adams, England’s No.1 and ranked 13th in the world.

In his First Round game Mr Adams is playing against one of the many Spanish players in this festival FM Emilio Miguel Sanchez Jerez from Murcia.

James Humpreys, whose company has been sponsoring the game for nine years, four of them as the main sponsor, welcomed the players and wished them well. “Have a great time!” he told them all.

As play began he spoke of the importance of the development of chess on the Rock and of the Festival itself.

“Tradewise is becoming synonymous with chess as much as it is to insurance and this is important for Gibraltar. In chess we have Tata Steel, and I hoping that over the years Tradewise will be exactly the same as that company in its association with the festival,” he said.

Moments later the 252 chess players in The Masters from some 60 countries made their opening moves in the tournament which is being held over the next 10 days over 10 rounds.

The top woman player this year is Anna Muzychuk (Slovenia). 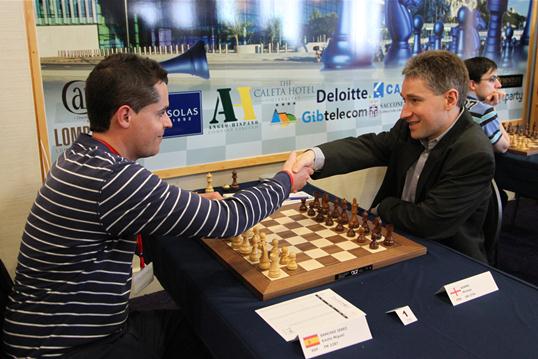 Top board Adams and Sanchez Jerez