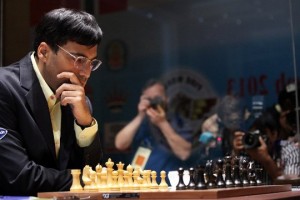 The Chessdom Chess Shop launches an exclusive mega pack of games, analyzis, puzzles, and commentary of eight world champions – Viswanathan Anand, Bobby Fischer, Garry Kasparov, Alexander Alekhine, Mikhail Tal, Emanuel Lasker, Jose Raul Capablanca, and Boris Spassky. The pack is a download version of 8 DVDs and many of the games come with commentary.
By ordering until the end of November you receive a free seat in an online simul vs GM and pgn analysis of all games from Sochi World Championship.

“Among the champions who I met a lot it was just Capablanca that impressed me most.” (M. Botvinnik, The 6th World Champion). Play like the 3rd World Champion Jose Raul Capablanca in 250 most interesting and instructive positions from his games. This course also includes 640 games collection, deeply commented and annotated.

All 2929 games played by Viswanathan Anand. About 550 of them with commentary. 191 exercises: play like Anand and play against Anand. Described by grandmaster and chess commentator Lubomir Kavalek as one of the most versatile world champions ever, Anand has won the World Chess Championship five times, and was the undisputed World Champion from 2007 to 2013.

The most complete collection of Tal’s games ever compiled. Contains 2,592 games, covering the entire career of the most brilliant attacking chessplayer in history. All the games thoroughly annotated by GMs Khalifman, Kochiev, Makarichev, Sveshnikov, Yudasin, and Petersburg IMs.

All 946 games played by the legendary World Champion, 217 of them with commentary. Games are arranged in chronological order. Total 130 exercises: play like Fischer and play against Fischer.

Learn to play like the 10th World Champion Boris Spassky, one of the superior masters of attack in chess history, in 185 most interesting and instructive positions from his games! This course also includes thoroughly commented 400 best games and attacks of Boris Spassky and as many as 1965 games with short annotations.

Considered by many to be the greatest chess player of all time, Garry Kasparov left a legacy definitely worth studying. This course contains all 2466 games played by the legendary World Champion. About 300 of them with commentary. 225 exercises: play like Kasparov and play against Kasparov.

The course contains 1300 commented games played by the 4th World Champion Alexander Alekhine. The annotations by Alekhine and his contemporaries have been revised and enlarged by IMs J. Ulko and A. Mitenkov. 600 games are commented for the first time!

Learn to play like the 2nd World Champion Emanuel Lasker in 203 most interesting and instructive positions from his games! Try and find both strong and beautiful moves. This course also 630 games, deeply commented and annotated, covering the entire Lasker’s career (held the title from 1896 to 1921).