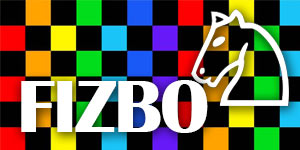 Fizbo chess engine is a new participant in TCEC Season 9

Fizbo chess engine, by Youri Matiounine, is one of the nine new participants of the Top Chess Engine Championship Season 9. Currently being tested by CCLR, it has an approximate rating of 3050 ELO.

Fizbo has been in development since 2013. The first official version was released in May 2014, and the latest version (1.7) has been released in March 2016. It contains support for 6-piece SYZYGY tablebases and introduces extensive changes to evaluation function. In TCEC Season 9 Fizbo will participate with a version that will receive a few last minute improvements to gain more ELO points.

Fizbo is entirely original chess engine written by Youri Matiounine. It was inspired by open source engines Fruit, and later by Stockfish. It uses most techniques used by other top engines. Latest development was been focused on searching for additional features of evaluation function using automated coefficient tuning methods.

Fizbo is the second new chess engine announced for the new season of the Top Chess Engine Championship after Andscacs.

About the Fizbo author

Youri Matiounine is an actuary and an amateur programmer who lives in New York. He has been developing Fizbo chess engine since 2013.