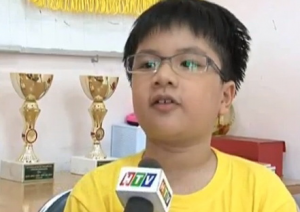 Nguyen Anh Koi is already a star in Vietnam, now it is time the world to learn about him

FM Nguyen Anh Khoi was convincing in his win in the U10 World Youth Chess Championship. After 10 rounds of play the young chess player from Vietnam had 10,0/10, and today he confirmed his superiority by yet another win finishing the WYCC with perfect score of 11,0/11. Does the chess world know who this young phenomenon is? For those following youth chess, FM Nguyen Anh Khoi is no surprise. His star rose in 2010 when he conquered the U8 Asian Youth Chess Championship. He missed the medal with a loss in the last round in the World Youth 2010. He started competing in the U10 category in the Asian Youth Chess Championship 2011, where he was one of the youngest players, and finished at solid 7th position. In 2012 FM Nguyen Anh Khoi participated in the 13th ASEAN age group championships, scoring 8,0/9 and grabbing the gold medal U10.

Now with the performance at the World Youth Chess 2012, FM Nguyen Anh Khoi adds another gold medal to his carreer and makes a serious bid to be a future chess prodigy.

Experienced trainer Adrian Mikhalchishin commented on the game of FM Nguyen Anh Khoi from round 9, “I am impressed – practically all moves were the best! Remember this name!” Here is the full commentary with diagrams.

Enjoy the game commentary and expect a full detailed WYCC report of all groups on Chessdom.com.

Correct way how to develop play on the Kings side, as other moves are a bit artificial.

It is necessary to exploit any chance opening position of enemy King.

Correct plan, but it was possible to start, bringing Rook into the attack first [14…Tc8]

Black continues to build up his presence on the Queens side, much closer to the White King.

Preferable was to stop development of Black Bishop 21.Ld4

Not completely bad, but once more exchange sac was a bit better 23…Txc3 24.bxc3 Dxc3

At this age kids don’t know the real value of typical exchange sacrifice, which could be performed many times! 25…Txc3 26.Dxc3 Da5 27.Da3

I am impressed -practically all last moves were the best! Remember this name!