The strong open at Reykjavik is already heating up. The match-ups of the 4th round were more balanced and the games more fighting. Four players kept their perfect score and now share the lead: Maxime Vachier-Lagrave, Pavel Eljanov, Yu Yangyi and Grzegorz Gajewski.

There were some battles that finished rather quickly given the quality of the players.

GM David Navara bounced back from his two draws against lower rated players with a 28-move win against IM Robert Ris. The Czech super-GM went for a direct kingside attack against the Grunfeld. First, he sacrificed his bishop for two pawns on the 15th move, then Ris made a big blunder and Navara was able to show a nice tactical sequence to win the game.

GM Maxime Vachier-Lagrave just needed 24 moves to get his fourth straight victory. Dutch GM Erwin L’Ami chose the Caro-Kann Defense and took way too long to develop his kingside. Maxime exchanged the queens in a very favorable position and went for a central attack. In the final position, the French GM has the initiative and has recovered all the sacrificed material.

The beginning of round 4

Pavel Eljanov defeated GM Kveinys Aloyzas from Lithuania with the white pieces. The Ukrainian used his queenside play effectively and got a passed pawn on the a-file. When a queen trade was unavoidable, the Lithuanian resigned understanding that the rest was just a matter of technique.

Yu Yangyi’s victory was of a different nature. His rival, American GM Yuri Shulman, chose the French Opening and went for a very tactical line where he keeps his king in the center. The Chinese attacked his brave opponent from all flanks until the black position became way too vulnerable even for the talented Shulman. The game finished after 33 moves in a position where white is about to get a rook advantage. 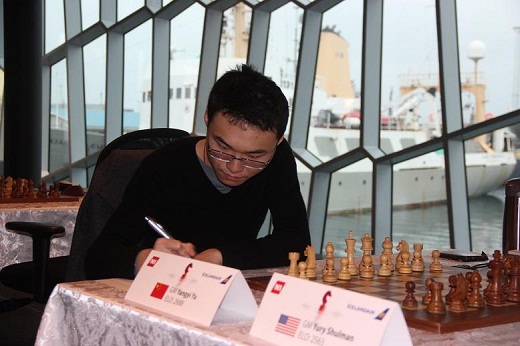 GM Grzegorz Gajewski was the last player to get a perfect score, after defeating IM Andrew Muir, who had already upset a GM in the second round. It took 74 moves for the Polish to get his victory. Muir arrived to an almost equal endgame, but his more experienced rival managed to outplay him. Gajewski will play against Yu Yangyi in tomorrow’s round.