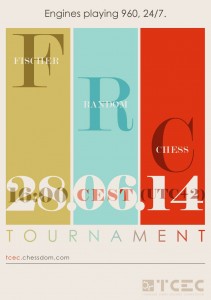 TCEC Special event FRC (Fischer Random Chess) has just started. The reigning TCEC champion Stockfish, modification 260614, defeated Shredder 12 in the very beginning of the tournament. It won with white pieces in 69 moves. In the other game of the day Fire 3.1 won against Tornado.

In Fischer Random Chess aka Chess960 the pieces at the starting position are placed randomly in one of the 960 possible ways. The engines will play from move 1 without opening books, which makes the event even more interesting.

The big question after Round 1: is Stockfish really that strong as it proved to be in TCEC – Season 6? Follow the event live, 24 hours a day on the TCEC official website!

Interview with Martin Thoresen – organizer and director of TCEC