The 6th Grand Prix will take place in Paris, between 21st September (arrival) and 5th October (departure). The last of the Grand Prix is organized by FIDE in cooperation with the French Chess Federation.

The participants list has been known for months, but there have been last minute replacements, as Svidler, Karjakin and Radjabov will not participate in the event. Their places are taken by Fressinet, Bacrot and Tomashevsky. Find the full list below.

With Veselin Topalov mathematically qualified for the Candidates Matches 2014 (note: Candidates bid from Khanty Mansiysk), the major question in the FIDE Grand Prix Paris is whether Fabiano Caruana or Alexander Grischuk can overtake Shakhriyar Mamedyarov. 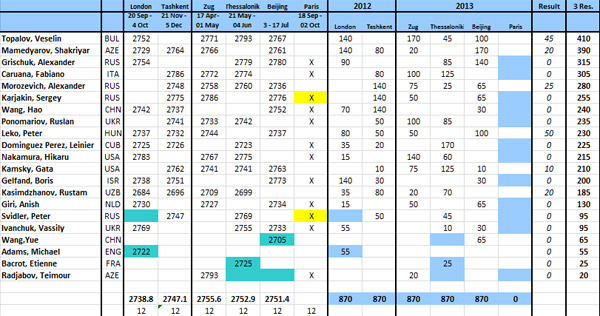 If you ever thought Paris was dubbed “The City of Light” thanks to its early-on electrical street lighting or for the fabulous night life, you’ll be just partially right; the famous nickname dates back to the Age of Enlightenment, when the French capital became the centre of education, of arts and philosophy, thus the ‘enlightened’ place to be.

With an illustrious artistic pedigree and with more recognizable landmarks than any other city in the world, Paris stubbornly remains probably the most filmed and photographed and wanted place on earth. In short: an ideal stage for the final and decisive cultural event on the chess players’ agenda – the sixth FIDE Grand Prix!

So we might have the perfect scene – a marvelous metropolis; the producers – FIDE in collaboration with FFE (French Chess Federation); the dates of the play: 21st September – 5th October 2013; an interesting plot: a war to the knife combat for the qualifying spot in the Candidates event; but where is the vital element, the…actors?!

Dear chess friends, I am happy and honored to raise the curtain and I hope you’ll get your front seat for a great show!

The only page that remained unwritten is the Paris one…and as it happens, the final blow, as in any good book, is disclosed at the very end, on the last page…we shall see what surprises Paris has reserved for us.

First one would be: the final list of players is not exactly the one which you might expect from the table above. In light blue, on the Paris column, we understand the respective players should be present; which is still the case but with some changes, as we shall see in the following:

Three players of the twelve participants: Sergey Karjakin, Peter Svidler and Teimour Radjabov, stepped out of the tournament, being replaced by: Evgeny Tomashevsky, Etienne Bacrot and Laurent Fressinet. Therefore, the current and final starting list would be:

Bacrot, Etienne: the former child prodigy remains one of the strongest French players and promises to satisfy the locals demands with an honorable spot in the final standings;

Caruana, Fabiano: had a meteoric rise in the past year, winning several big tournaments with his versatile playing style; currently he is one of the two players from this tournament (next to Grischuk) with a chance to make it to the Candidates event if he will grab the first place unshared;

Dominguez, Perez Leinier: coming from a country where chess is enormously popular, the country of Capablanca, the Cuban player proved his class by winning one of the previous GP editions, the strong Thessaloniki event; he has now the highest rating of his career, 2757;

Fressinet, Laurent: in the past few years he established himself as a 2700+ player and recently won the Men’s Rapid at SportAccord World Mind Games form Beijing;

Gelfand, Boris: has been around on top level chess for more than 25 years – a classical player with a phenomenal weaponry; he recently had a peak in his career when he qualified for the World Championship match against Anand, who only managed to defeat him by winning the tiebreak; the 8th Tal Memorial of this year was also won by Boris, so we shall see if experience will again prevail over the youth impetus;

Giri, Anish: for the Dutch prodigy, the GP series is a wonderful launching platform on his way to the very top, because Anish aims for nothing less than his abilities;

Grischuk, Alexander: in a shoulder to shoulder combat, Grischuk is the second contender for the final spot in the Candidates event, under the same clause as Caruana: to win unshared in Paris; as a versed player in the Candidates: Mexico (2007) and Kazan (2011) – the Russian time-trouble lover will be an interesting player to be watched;

Ivanchuk, Vassily: alias “Chucky” is a rather unpredictable and very original player, who, if in his best shape, can literally beat anyone in the world!; needles to mention his provocative but multilateral playing style, with a proverbial memory and always in search of the truth;

Nakamura, Hikaru: the American proves that he can (!), with his very ambitious and aggressive style;

Ponomariov, Ruslan: former world champion and one of the youngest GM in the history, the Ukrainian amazes with his branded skills of getting water out of stone, in some of what other people would regard as the most deserted positions;

Tomashevsky, Evgeny: is in great shape, as we could see from his amazing fighting skills in the World Cup, where he eliminated Aronian, Morozevich and Kamsky! He only lost against Dmitry Andreikin; had he won, he would have been qualified for the Candidates already!

Wang Hao: the strongest Chinese player at the moment, Wang Hao has the fame of being able to upset the top class elite, as he showed to all of us this year in his beautiful wins against Carlsen in Norway and twice Anand (Norway + Wijk Aan Zee);

If only Caruana and Grischuk have the chance to outrun Mamedyarov, to join Topalov in the next Candidates event, what will be other players fighting for, besides glory, rating points and the mere pleasure of playing chess?

Money is quite a good motivation trigger, so the prizes of 240 000 Euros is not an insignificant amount, with the specification that 170k will be paid out after the event and 70k will be going to the accumulated prize fund of 420k, which will go to top ten players overall.