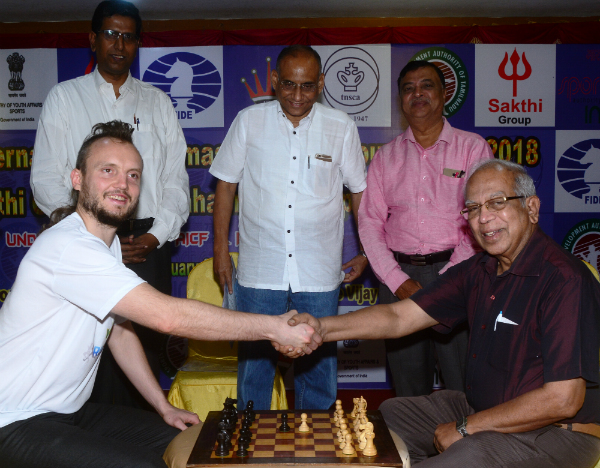 In a well contested Pirc game Laxman showed aggression, when the situation so demanded, coming up with success in 58 moves. Speaking about the game, Laxman said, “My position was getting passive and I counter-attacked to stay on course. My aggression on king-side 21.g4, caught GM Sivuk Vitaly off-guard and I managed to come up better in complications”.

Earlier, local star Woman FIDE Master J Saranya held Grandmaster Yuri Solodovnichenko of Ukraine to a draw in the second round, while World Under 12 Champion Divya Deshmukh got her first GM scalp taming Grandmaster Nguyen Duc Hoa of Vietnam in the third round.

Chennai boy Thrish Karthik set the tone for inaugural day, scoring an upset win over Grandmaster Suat Atalik of Turkey in the first round while, top seed GM Timur Gareyev of USA scored a comfortable victory in the top board. The second board saw Russian Grandmaster Ivan Rozum shedding half a point to lower rated Harshal Patil.

In a Kings Indian Defence game that lasted 75 moves, Thrish got the better of GM Suat Atalik of Turkey. An end game lapse in the fourth hour saw Suat Atalik going an exchange down, which Thrish Karthik converted precisely in his favor.