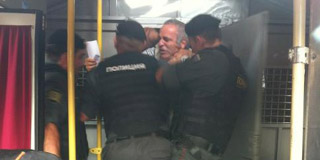 This happens just hours after Pussy Riot have been found guilty of hooliganism by the Moscow court.

According to initial information Kasparov was one of 400 protestors outside the court. With massive police presence the crowd was divided into two groups and after confrontation from the Pussy Riot supporters, Kasparov and 20 more participants have been arrested. According to unconfirmed report by his editor’s twitter account (see update 3) he was later beaten by the police, while the police itself claims (see update 5) that Kasparov was biting the hand of an officer during the events.

Garry Kasparov is the chairman of the Human Rights Foundation’s International Council.

Update 1: This appeared on Garry kasparov’s facebook page, and somewhat differs from initial mainstream media reports: “Garry Kasparov has just been arrested outside the Moscow courthouse where the Pussy Riot trial is taking place. He was not there to protest, simply to attend, and the police cornered him and dragged him into the police van. This photo shows the police assaulting him inside the van.

Update 2: Yuri Timofeyev published this photo in Twitter with comment “Kasparov was highly surprised that he is being detained.” 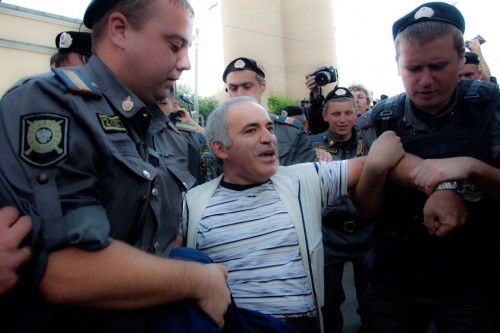 Quote: “We spoke to Kasparov at police station. Was beaten but is ok. Isn’t sure what next step is. Cops waiting for orders from above.”

Quote 2: “Garry was talking with journalists when the police pushed in to drag him away. Not protesting”

Update 4: Interfax managed to speak to Kasparov at 15:00 CET, he said. “At first I did not realize why they arrested me – I was giving interview to a journalist. But then they put me in a van and brutally beat me.”

Update 5: During his arrest Kasparov has bitten the hand of a major police officer. The policeman has gone for official medical confirmation of the incident.

Update 6: No official charges have been pressed against Kasparov yet. News on that topic are expected today.

Update 7: After the two year sentence of Pussy Riot has claimed the full media attention for the past hour, information on Kasparov starts coming again. According to Kommersant, Garry Kasparov denies the having bitten a policeman. The reportedly bitten policeman is still in hospital awaiting medical confirmation. So far 49 people have been detained from the 400 protestors.

Update 8: The police have confirmed that an officer has been bitten by Kasparov. The officer suffered injuries on the left hand that have been certified by the medical staff. Now the local Interior Department is preparing papers against Garry Kasparov, supposedly for aggression against the police.

In March 2012, during an improvised and unauthorized concert in Moscow’s Cathedral of Christ the Saviour, three women from the band were arrested and charged with ‘hooliganism’ and their trial began in late July. The band members have gained sympathy both within Russia and internationally, due to allegations of harsh treatment while in custody and a risk of a possible seven-year jail sentence, and have also been criticized in Russia for offending the feelings of religious people. Alexei Nikiforov, a federal prosecutor, has demanded prison for the trio because they ‘abused God’. Pussy Riot’s lawyers said that the circumstances of the case have revived the Soviet-era tradition of the show trial.

On February 21, 2012, as a part of a protest movement against the re-election of Vladimir Putin, three women from the group came to the Cathedral of Christ the Saviour of the Russian Orthodox Church in Moscow, crossed themselves, bowed to the altar, and began to perform a song. After less than one minute, they were escorted outside the building by guards. The film of the performance was later used to create a video clip for the song.

In the song, the group asked the “Theotokos” (Mother of God, i.e. the Virgin Mary) (rus. Богородица Bogoroditsa) to “drive Putin away”. The song also describes the Russian Patriarch, Kirill I of Moscow, as someone who believes in Putin rather than in God. Kirill showed open support for Putin as a candidate before the presidential election.

Today, three members of the band were convicted of hooliganism motivated by religious hatred, over a protest in a cathedral. Kasparov was among the 400 protestors and arrested while confronting the police.