Gawain Jones on Monday ensured his victory in the British Knockout Championship with 2 Rapid wins over fellow English GM Luke McShane, taking him to an insurmountable 17-3 lead without any need for points in the Blitz portion of the match.

In the first Rapid game, McShane – desperately needing a win to get back in contention, played an unsound knight sacrifice in the hopes of levering open the kingside. Jones refuted the sacrifice, wrapping up efficiently, and despite some nervy play in the second game, only once looked in danger when McShane could have tried to mix it up by opening files against the king.

The remainder of the games were played out in exhibition style, even though the match was decided, as per the tournament rules. The final score, after all 8 games, was 21-7.

In the Third Place Playoff match, Mickey Adams eventually triumphed 16-12, winning the second Rapid game and the last two Blitz games. The fact that the match was in doubt until the last Blitz game underscored that Adams appeared to be struggling to find his best form.

The British Knockout was run alongside the London Chess Classic, the final leg of the Grand Chess Tour, and provided welcome excitement during some of the Classical GCT games, where high-level endgame technique and subtle defensive resources led to drawn games without many thrills and spills for the average chess fan to appreciate. 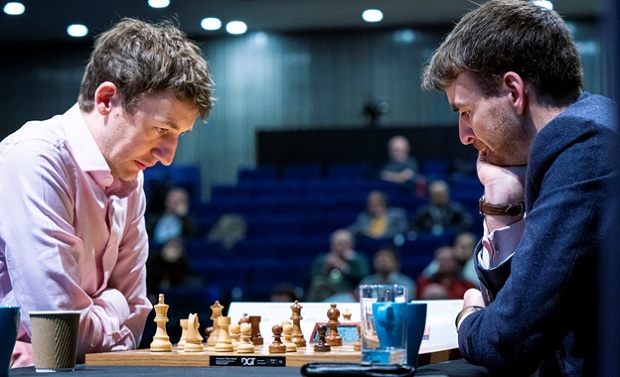 Gawain Jones more effectively took his chances in his match with Luke McShane, who had a mountain to climb after losing Classical Game 2 on Sunday. (Photo: Lennart Ootes)