The third round of the Alekhine Memorial saw an important turning point in the event. Michael Adams, who arrived as the sole leader after two consecutive wins, lost against Boris Gelfand and now shares the lead with the Israeli and Maxime Vachier-Lagrave.

The only decisive game of the round was also the last one to finish. Boris Gelfand squeezed a fine technical win over Michael Adams in 77 moves. The Israeli showed his great positional sense and precise endgame technique to reach this victory. The players left the opening after a lot of exchanges, and arrived to an interesting endgame. Through some tactical shots, Gelfand managed to win the Englishman’s c7-pawn. Adams, then, already knew that a long defense was ahead.

Gelfand had a pawn majority on the kingside, but black’s rook was rather active. Gelfand had to improve his pieces slowly until he was ready to take actions. When his king was already on f5, he decided to give up the exchange for two connected passed pawns. The Israeli centralized his knight and used the principle of two weaknesses to get the full point. He is now on 2/3 and is a member of the leading pack. 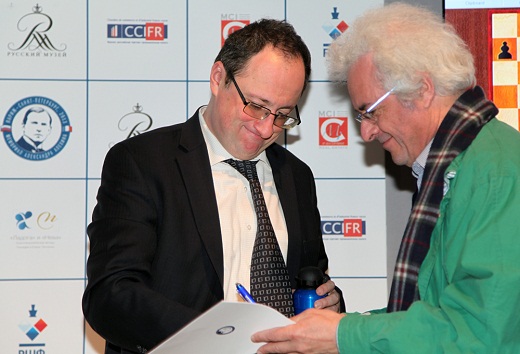 Vladimir Kramnik obtained a pawn advantage against Maxime Vachier-Lagrave. but could not convert this into a full point in the complicated rook endgame. The ex-world champion used his beloved Reti to try to repeat his feat from the first round, when he defeated Vitiugov out of this opening. He spent a lot of time on his clock looking for an strategy to outplay his opponent, but ended up giving up his hopes on move 54.

World Champion Viswanathan Anand and Levon Aronian signed the first draw of the day. Their preparation, as is usually the case, was very accurate and neither of them could get an edge. 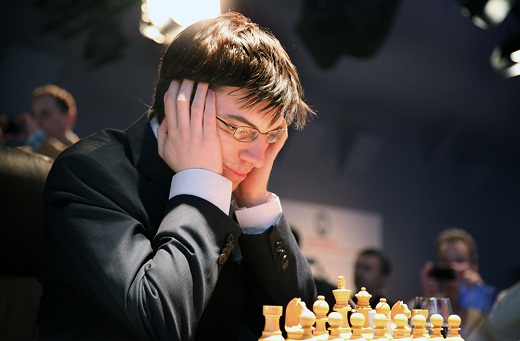 The Russians Peter Svidler and Nikita Vitiugov also drew, but in a much more exciting battle. Vitiugov, who won the Gibraltar Masters earlier this year, used the French defense. A very sharp position came up on the board. Both players kept their kings on the center and obtained some attacking chances. Vitiugov gave a perpetual check with his queen on move 34 to avoid entering into a worse endgame. 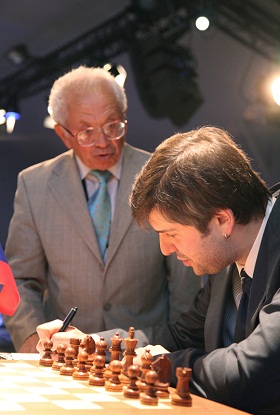