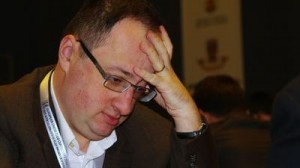 The 2012 World Chess Championship match between the current World Champion Viswanathan Anand and the challenger for the highest FIDE title in chess Boris Gelfand will take place in Moscow in May.

The 2,55 million USD match and its contract signing are making headlines today all over the world.

Indian chess champion Viswanathan Anand and his Israeli rival Boris Gelfand agreed Saturday to play a $2.5-million series of matches in a historic Moscow art gallery for the 2012 world crown. The May 10-21 series will be played inside Moscow’s Tretyakov State Gallery across the Moscow River from the Kremlin and comprise 12 matches played under classic World Chess Federation (FIDE) rules.

“Moscow’s bid to host the match was accepted because Russia is a neutral country,” FIDE chief Kirsan Ilyumzhinov said upon the player agreement’s signature in Moscow. “Plus, the Russian Chess Federation ensured a purse that was half-a-million dollars larger than any other city’s,” Interfax quoted Ilyumzhinov as saying.

Gelfand enters the match as the winner of the Candidates tournament and is ranked 14th by FIDE. Anand – who has already defended his title against Russia’s Vladimir Kramnik and Bulgaria’s Veselin Topalov – is ranked FIDE number two behind Norway’s Magnus Carlsen.

The news hit the mainstream media as it appeared in Yahoo sports section, Eurosport, France 24, PanArmenian, CBS news, NBC, Washington Post etc. and attentive Chessdom.com followers reported the news to be seen on TV or being on the radio in multiple countries across Europe and Asia.