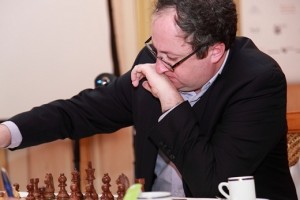 The fifth round of the Zurich Chess Challenge 2013 is in progress. Boris Gelfand played with white against Viswanathan Anand. They signed a draw exactly on move 40.

The World Champion advanced his queenside pawns early in the game, and Gelfand responded naturally using them as targets. Anand gave up two pawns for the exchange and invaded on the second rank with his rook. The Israeli coordinated his knight and bishop to defend his passed pawn on the queenside, but Anand’s rook was too annoying. The players repeated moves and signed the draw when the time control had just passed.

Kramnik and Caruana are battling in a very original position. The Russian, once again, played a sideline to avoid showing his home preparation. He attacked on the kingside and Caruana – just like Anand – sacrificed the exchange for two pawns in order to avoid getting his king in trouble. A difficult struggle took place on the early middlegame and everything is still up for grabs after 43 moves.