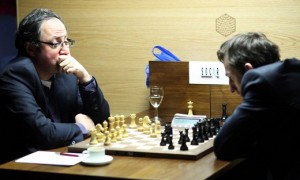 The first game to finish in the last round of the Candidates Tournament was the battle between world championship challenger Boris Gelfand and Alexander Grischuk.

The Russian used the Gruenfeld Defense and Gelfand went for the 5.Bd2 line. This safe positional setup led the game to some simplifications in the early middlegame. Grischuk left the exchanges phase with a queenside majority and managed to spoil his opponent’s kingside pawn structure. On the other hand, the Israeli got a strong centralized position with a dangerous passed d-pawn. Grischuk took the first chance he had to give perpetual check and avoid getting in trouble.

The contenders of the final match at the last Candidates event in Kazan finished with 6.5/14 points. Gelfand had an important role in the overall tournament, as he defeated Levon Aronian when the Armenian still had chances to go for first place. Grischuk, on the other hand, only played three decisive games.