The Candidates Tournament is already getting closed to the decisive rounds and the tension is rising among the players. Vladimir Kramnik managed to put pressure on Magnus Carlsen’s position but could not convert it into a full point, while Boris Gelfand defeated Levon Aronian, who now stands in second place half a point behind the Norwegian.

Levon Aronian chose to use a Stone Wall setup against Gelfand’s calm play in the opening. The players traded their knights and the Armenian was left  with a slightly misplaced bishop. When the position opened up a little bit, Gelfand’s centralized pieces proved to be better placed and the Israeli got a very strong passed d-pawn.

When the players were approaching the time control, the computer pointed out a line where Boris could have forced a straight-forward win, but the World Champion Challenger decided to trade the queens instead, going into a superior rook endgame. White’s passed h-pawn ended up being the decisive factor in the position. Aronian kept fighting in what seemed to be a completely hopeless position, but was forced to give up on move 60. 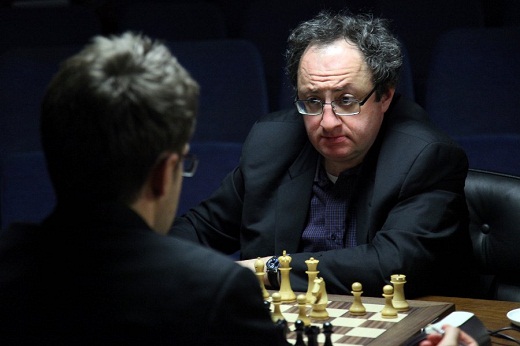 The main game of the day was the first one to finish, but it also got the attention of the people following the live transmission. Kramnik used his typical style in one of his favorites openings – the Catalan. He managed to gain a pawn on the queenside, but Carlsen’s endgame technique once again allowed him to save a half point. The Norwegian used the drawish tendencies of the opposite-colored bishops endgames masterfully. The ex-world champion gave up his attempts to win on move 41. 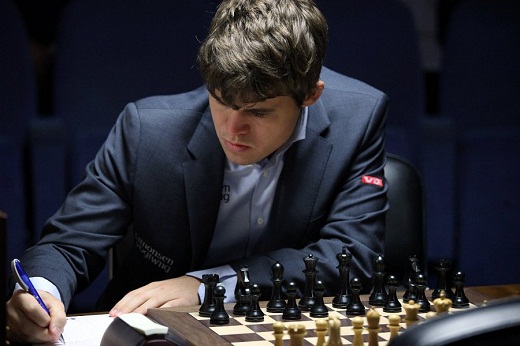 Vassily Ivanchuk got his first victory of the event against Teimour Radjabov. The Azerbaijani decided not to use his favorite King’s Indian Defense and went for a quieter setup with the black pieces. Ivanchuk did not try to force things too much and instead developed his pieces logically. Some simplifications took place and the players went into a four rooks endgame where Ivanchuk had a slight space advantage.

During the technical phase of the game, the veteran demonstrated that he can play accurately even after several hours of struggle. Radjabov did not choose the right way to defend and his position started to fall apart. Resignation came on move 76, when a pawn promotion by white cannot be stopped.

The Azerbaijani is now in last place with 3/9 points. 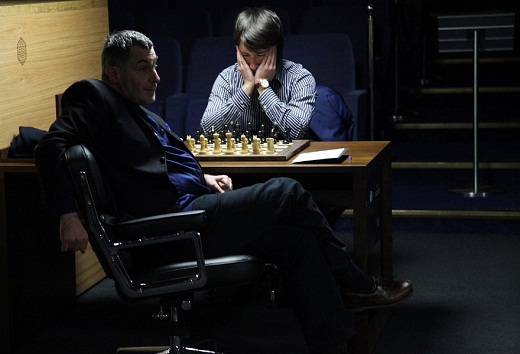 The Russian match-up between Peter Svidler and Alexander Grischuk finished peacefully. The Sameisch variation of the King’s Indian Defense was seen on this board. Probably, most of the game followed their home preparation as the players moved really quickly in a completely sharp position. On move 17, Svidler even sacrificed his queen and did not take too long to demonstrate that there was enough compensation. The players signed the draw right after the time control. 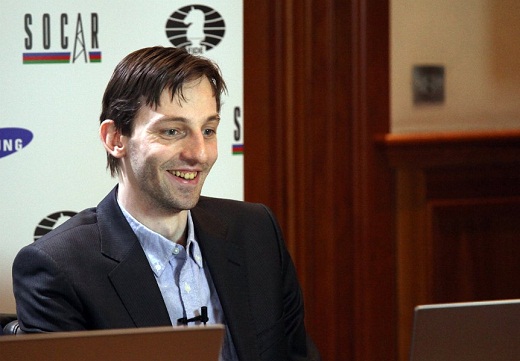