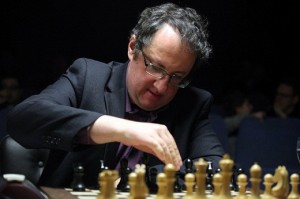 Carlsen already managed to maintain his +3 score, while Aronian fell to +2 after losing his game against Boris Gelfand. This is Gelfand’s second straight victory in the tournament.

Levon Aronian chose to use a Stone Wall setup against Gelfand’s calm play in the opening. The players traded their knights and the Armenian was left  with a slightly misplaced bishop. When the position opened up a little bit, Gelfand’s centralized pieces proved to be better placed and the Israeli got a very strong passed d-pawn.

When the players were approaching the time control, the computer pointed out a line where Boris could have forced a straight-forward win, but the World Champion Challenger decided to trade the queens instead, going into a superior rook endgame. White’s passed h-pawn ended up being the decisive factor in the position. Aronian kept fighting in what seemed to be a completely hopeless position, but was forced to give up on move 60.

Aronian now stands half a point behind Carlsen with five rounds to go.