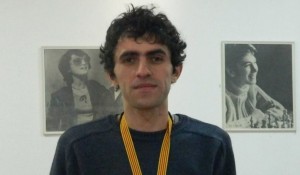 Gaioz Nigalidze, winner of the Georgian championship in 2013 and 2014, used a smart phone hidden in a toilet to consult moves with a chess computer.

A chess Grandmaster has been banned from the Dubai Open Chess Tournament after he was found to have used an electronic device during a match. GM Gaioz Nigalidze of Georgia was caught by tournament officials consulting a device hidden in one of the toilet cubicles of the Dubai Chess and Culture Club during his sixth-round encounter with Armenia’s GM Tigran Petrosian.

International Arbiter (IA) Mahdi Abdul Rahim, the tournament’s chief arbiter, said Petrosian had earlier informed tournament officials of his suspicion that Nigalidze was getting help from a chess computer through a portable electronic device during the game, as the Armenian noticed the Georgian was oddly frequenting the toilet after each move during a crucial part of the game.

When the officials initially checked Nigalidze, they did not find any device with him. The tournament Director and the Chief Arbiter were suspicious that he is using the same cubicle. When they checked the cubicle in question, they found a mobile phone and a headset hidden behind the pan and covered with toilet paper. When confronted, Nigalidze denied he owned the device, but officials opened the smart phone and found it was logged into a social networking site under Nigalidze’s account. They also found his game being analyzed in one of the chess applications.

Nigalidze was back-to-back winner of the Georgian Chess Championship in 2013 and 2014, and was also crowned champion of the Al Ain Classic in Al Ain last December.

Abdul Rahim has removed Nigalidze from the tournament and will send a report about the incident to the International Chess Federation, which has recently established a commission to deal with cheating in chess competitions. He said players proven to have committed such an offence will be suspended for three years from all sanctioned tournaments, and up to 15 years in case of a repeat offence.

It was not the first time a player was caught cheating at the Dubai Open. In 2008, an Iranian player was also banned from the tournament after he was found to be receiving help from someone who was watching the game’s live broadcast on the internet and was sending the moves through text messages.

Tournaments sanctioned by the International Chess Federation, including the Dubai Open, do not allow players to carry with them mobile phones and other electronic devices during their games. 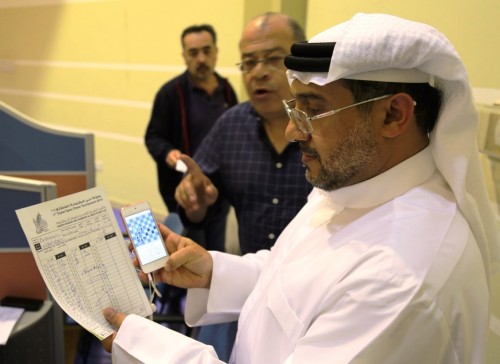 Vocaturo, who was derailed by untitled Mokal Amruta Sunil of India in the opening round, used the French Defence to defeat Polish GM Mateusz Bartel in 51 moves to up his tally to five points in six games. Top-seed GM David Howell of England also has five points to maintain his hold of the leadership despite successive draws in the fifth and six rounds with GM Nils Grandelius of Sweden and GM Alexander Shabalov of the US respectively.

The Dubai Open Chess Championship – Sheikh Rashid Bin Hamdan Al Maktoum Cup offers a total cash purse of US$50,000 to the winners, with US$12,000 going to the champion.