The 12th Rochefort Open tournament was held on 16th-22th February 2013 at the Congres Palais, in Rochefort, France.

Just days before the huge Cappelle-la-Grande Open, the Rochefort Open was an excellent occasion for the players to test their preparation.

The Open A, which was reserved for players rated 1900 or higher, had 55 participants. Georgian GM Davit Jojua emerged clear tournament winner after collecting 7 points from nine games.

IM Karen H. Grigoryan from Armenia and IM Kore Akshayraj and India finished in the group of players on the shared second place and also earned Grandmaster norms.

This is the third GM norm for Akshayraj and now he only needs to pass the 2500-elo mark to become a new Indian Grandmaster. 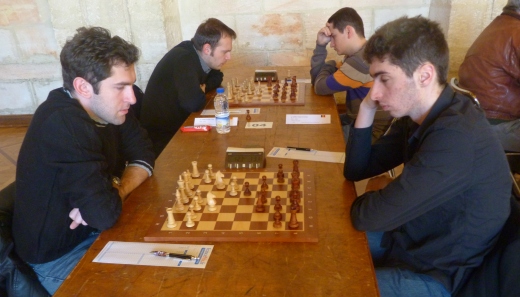 The Open B, reserved for the players rated under 2000, had 84 participants. Cyrille Gauthier FRA 1797 took a clear first place and the top prize with 7,5/9 points.

The Blitz tournament with 34 players was staged on 20th February. IM Karen H. Grigoryan won the event with 9,5/11 points.

Information about the tournament is available at http://www.echiquier-rochefortais.com/english.php