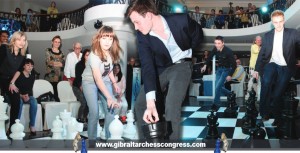 The Gibraltar Chess Festival 2015 is going to take place 26 January – 5 February in the Caleta Hotel, Gibraltar. The long traditions of the festival, the fantastic organization, and the hefty 175 000 pounds prize fund have attracted many of the top world grandmasters.

Veselin Topalov, whose current ELO is exactly 2800 (making him world number 3 on FIDE’s January list), will be the highest rated player ever to take part in Gibraltar. His main opponents from the 2700 club include Hikaru Nakamura, Peter Svidler, Nikita Vitiugov, Dmitry Jakovenko, Pentala Harikrishna, Yu Yangyi, and Richard Rapport.

Hou Yifan, the reigning Women’s World Chess Champion, the youngest ever to win the title, as well as the youngest female player ever to qualify for the title of Grandmaster, is seeded 13th in Gibraltar. She will be joined by several compatriots including Wey Yi (currently playing Tata Challengers), Ju Wenjun, Guo Qi, and Xu Jun.

England will be represented by Gawain Jones, David Howell, Nigel Short, Jovanka Houska, Robert Bellin, Lawrence Trent, andNigel Povah among many others in the Challengers and Amateur sections.

USA will be aiming for the top positions with a mix of young and experienced players. Besides the second seeded Nakamura, Gribraltar 2015 will have Varuzhan Akobian, Daniel Naroditsky, Alexandr Lenderman, Kayden Troff, Irina Krush, James Tarjan, and John Watson.

Veselin Topalov to play on the Rock!

We are delighted to announce that Bulgarian GM Veselin Topalov will be joining us for the 2015 Tradewise Gibraltar Masters! Veselin, whose current elo is exactly 2800 (making him world number 3 on FIDE’s November list), will be the highest rated player ever to take part in Gibraltar.

Veselin became the FIDE World Chess Champion in 2005, cruising to victory in the 8-player double round event in San Luis, Argentina, after a blistering start of 6,5/7. He went on to contest two world title matches: versus Kramnik, in Elista, 2006, and versus Anand, in Sofia, 2010. The latter match was tied 5,5-5,5 before Anand won the 12th game.

As a young talent Veselin was especially fond of playing in Spain, winning many Opens there. His long tenure amongst the world’s elite is documented by many impressive tournament victories, such as the first three editions of the M-Tel Masters (2005-7); Tata Steel (Wijk aan Zee) 2006 and 2007 (both 1st=); Linares 2005 (1st= with Kasparov) and 2010; and Nanjing, China, 2008, this last a Category XXI event, won by Topalov with 7/10. More recently Veselin won the 2012-13 FIDE Grand Prix, which included two first places: 1st= in London 2012, and 1st in Zug, 2013. In this way he qualified for the 2014 Candidates tournament. At the 41st Chess Olympiad in Tromsø Veselin won the gold medal on board one, his tournament performance of 2872 the second best overall.

Veselin has been number one on the FIDE rating list a total of 27 months, which when compared to all others who have been so ranked, places Topalov in fifth place after Kasparov, Karpov, Fischer and Carlsen. He was ranked number one in the world from April 2006 to January 2007, during which his peak Elo rating was 2813, a level which until then had only been surpassed by Garry Kasparov.

Veselin regained the world No. 1 ranking in October 2008, and officially remained No. 1 until January 2010.

Veselin became a Grandmaster in 1992 and has been the leader of the Bulgarian national team since 1994. It’s interesting that his friend and long-time training partner, Ivan Cheparinov, won the 2014 Tradewise Masters. Can Veselin make it two years running for Bulgaria?

Hikaru Nakamura and Hou Yifan return to the Rock!

We are delighted to announce that two of the World’s top players, GM Hikaru Nakamura and current Women’s World Champion GM Hou Yifan have joined the stellar 2015 Masters line-up.

Hikaru is ranked No. 9 in the world by FIDE on the October 2014 list and is a three-time United States Chess Champion. Resident in St Louis, the American number one is currently our top seed at 2764. In January 2014 he reached his peak FIDE rating of 2789, which ranked him 3rd in the world. In May 2014 when FIDE began publishing official rapid and blitz chess ratings, Hikaru was ranked number one in the world on both lists. .

Hikaru is a busy player and is taking part in the FIDE Grand Prix event in Baku, Azerbaijan.

He has also recently competed in the European Club Cup for Obiettivo Risarcimento in Bilbao, a tournament which took place alongside the Bilbao Masters.

Soon after Gibraltar next year, Hikaru will be playing in the Zürich Chess Challenge (February 13-19), with the World’s elite including Caruana, Aronian, Anand, Karjakin, and Kramnik.

In 2008 Hikaru won the 6th Gibtelecom Gibraltar Chess Festival, beating Bu Xiangzhi 2-0 in a play-off match, after both scored 8/10 in the Masters. It’s worth noting that after five rounds Hikaru only had 3/5, but then won five games in a row, to tie for first place.

In 2009, Hikaru returned to defend his title. He nearly repeated his earlier performance, since after nine rounds he was in a five-way tie for first on 7/9, but his last round game, against Vugar Gashimov, ended a draw. We give the game here. Vugar died in January of this year, aged only 27. In April a Gashimov Memorial was held in Shamkir, Azerbaijan, Hikaru Nakamura being one of the invited players.

Gibraltar champion in 2009 was Peter Svidler, who overcame Vadim Milov in a tiebreak match.

Hou Yifan is the reigning Women’s World Chess Champion, the youngest ever to win the title, as well as the youngest female player ever to qualify for the title of Grandmaster.

Like Hikaru, she has recently been playing in the European Club Cup, in Bilbao. Although her team, Cercle d’Echecs de Monte-Carlo, only finished second, Yifan’s 2749 performance was the best on top board.

In her only previous visit to Gibraltar (2012) Yifan scored a sensational result, finishing equal first with England’s Nigel Short. Although Nigel won the blitz play-off 1½–½, Yifan’s score of 8/10 (+7 -1 =2) gave her a tournament performance of 2872.

The big story of the Gibraltar 2012 Masters was her victory over Judit Polgar (see right). On the new October rating list, Yifan is just two points behind Polgar. However, to put that into perspective, at her peak rating (July, 2005) Judit was 2735 and ranked #8 in the world.

Enjoy the sights of Gibraltar by day and the entertainment at night! The destination is packed with history and natural heritage, but in addition it boasts all the modern amenities that you would expect in a bustling European City.

Despite its compact size, Gibraltar surprises thousands of visitors each year with its range of activities and attractions that appeal to all age groups. Situated at the point where the Mediterranean Sea and Atlantic Ocean meet, it is no surprise that Gibraltarian life thrives on an abundance of water sports. These range from dolphin safaris in the bay to jet skiing, pleasure sailing and scuba diving.

If you are looking to maximise your time and experience a flavour of what’s on offer, why not book an official rock tour which takes about an hour and half. The sights visited are a fundamental part of the Gibraltar’s rich heritage and will give you a genuine insight into the city’s past and present. Attractions on the tour include the Nature Reserve, St. Michael’s Cave, the last resting place of Neanderthal man, the Medieval Castle, the world famous Barbary ape den, the Great Siege Tunnels which were dug out by the forerunners of the Royal Engineers to defend Gibraltar from attack, and The City Under Siege Exhibition.

Rock tours are available by taxi or coach at all points of entry. To experience some of the sights on foot, there are also a number of official walking tours, which will take you on historical and architectural trails through the main city centre.

A broad choice of restaurants, bars and cafes can be found along Main Street and in Casemates Square, along with high street shops and boutiques selling an excellent range of VAT free goods, including jewellery and time pieces, perfumery, electrical goods, alcohol and tobaccos.