Tourism Minister Neil Costa hosted a special dinner at the Mons Calpe Suite at the top of the Rock of Gibraltar on Tuesday evening on the first day of the Gibraltar Masters Tradewise Chess Festival for the visiting Grand Masters and sponsors of the tournament. See dinner speeches below by festival organiser Brian Callaghan, Tourism Minister Neil Costa, and GM Nigel Short.

Brian Callaghan, organiser of the tournament welcomed everyone and thanked the sponsors and Government for their support.

He said: “I would like to say thanks to the John Gaggero family for allowing us here tonight. It is their generosity in part that has made this possible. It also gives me great pleasure to add to our distinguished chess guests our Minister of Tourism, Neil Costa. Chess was mentioned in the election manifesto of this government, no less than three times, and I think we can say that this dinner is a demonstration of that commitment and how this government wants to welcome first class chess players, and indeed any chess players to come to Gibraltar.

I am absolutely delighted to be able to say that Stuart Conquest is taking up the role of Community Chess Professional on the Rock, tasked with developing chess into the community with junior chess. That decision was made possible by our sponsors Gibtelecom and the Government of Gibraltar.” 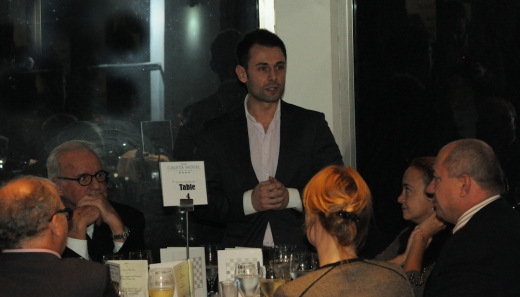 Tourism Minister Neil Costa said: “Let me thank you and welcome you to the Tradewise Chess Festival of 2013. It is my pleasure to be representing the Government of Gibraltar here tonight. Brian Callaghan rightly said that we mentioned the chess festival in our election manifesto for a very good reason. I believe that we always ought to start as we mean to go on and we based the events lead tourism of our Government on the very successful chess festival.

It is clear to us as it has been clear to many governments around the world that what attracts people to a particular destination, in addition to whatever inherent beauty and splendour it may have, and there is no doubt that Gibraltar has that magnificent splendour and tonight we stand in a beautiful and stunning location where we have two continents, three countries, the Mediterranean, the Atlantic and the Strait of Gibraltar, and the magnificence of the Rock.

But apart from any natural beauty a place may have, you also have an event. Certainly events lead tourism is now accepted by countries around the world as one of the centre pieces to attract tourists. The fact, that today we have and there will be during the course of the chess festival, high or full occupancy of hotels as a result of the festival, is a testament to the success of any country that wishes to promote its tourism product by way of events lead tourism.

The Rock is legendary and in modern times I feel it is fair to say that Gibraltar is increasingly known for its hospitality. We hope you will agree with us that the Gibraltarians are a warm welcoming people, and the fact that Stuart Conquest has decided to stay with us, shows the kind of place that we are and we welcome him with open arms.

Part of the promotion of Gibraltar today is not just as a tourism destination but as a place that people should want to come and relocate to. Perhaps we should have called a part of the brochure which promotes Gibraltar as a place to stay as “Make Your Move” given this is a chess destination. 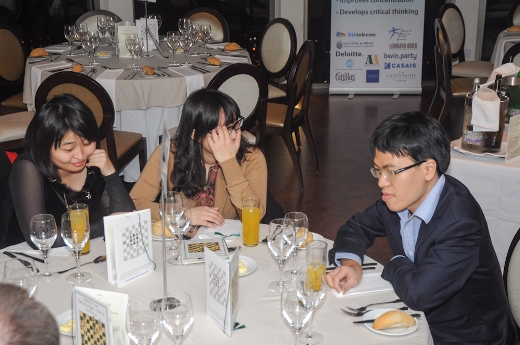 Players at the tournament

The Gibraltar Tourist Board is working hard not just to increase air connectivity from London and different parts of the UK to Gibraltar but also to have new European destinations and direct links. The better connected we are from different parts of Europe the easier it will be for people to come to Gibraltar. The easier it is the more people will come. It is not just about the tourism industry I feel increased air connectivity will be critical in the growth of our economy.

We have started with the chess festival and the fact that the Gibraltar Government has heavily invested in events lead tourism. Last year we had the first International Jazz Festival, the First Strongman competition which led to increased hotel occupancy. In October this year we will have the first Gibraltar International Literary Festival which will undoubtedly attract a class of people to Gibraltar which will hopefully start to compete with the wonderful success of the chess festival. We will continue the development of this policy.

In addition we believe that online transmission of events and of Gibraltar is key and critical. We are working with Gibtelecom on the development of WIFI hot spots all around Gibraltar and in particular at our tourism spots.

All this is part and parcel of not just trying to make tourism an important pillar but as far as I am concerned, my own particular mission, is to make it the main engine of economic growth because as keen as we are to promote all the critical parts of the Finance Centre industry we also need to appreciate that Gibraltar’s beauty and magnificence is its only natural resource and we need to capitalise on it in a sensitive manner.”

GM Nigel Short, winner of the 10th edition of the festival and of last year’s Diamond Jubilee prize, responded on behalf of the players.

He said: “It is great to be back here in Gibraltar, it is a tournament which is growing from strength to strength and people keep coming back not only because of the magnificent prize money. We come back because we feel very welcomed here. That is the best part of it and that there is a feeling of warmth and as chess players we feel respected.”