Gibraltar’s Governor Sir Adrian Johns has always been a great supporter of the Tradewise Chess Festival so it was not surprising to see him back in the eleventh edition of the tournament. He made the first move in the first round of the Challengers and Amateurs tournaments.

Shown round the hall by director Stuart Conquest and organiser Brian Callaghan, Sir Adrian got the chance to see both the Amateurs and the Challengers as they made their first moves. He welcomed everyone to this year’s festival and wished them well.

Looking back on last year’s tenth anniversary of the Gibraltar Festival, he was delighted it had been “a great Masters”, and proven a huge success. 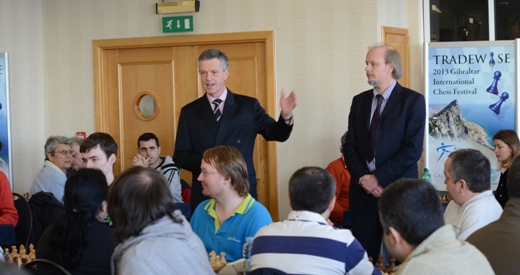 “The festival clearly has a huge attraction, and I suppose capacity is the only thing that will maybe make it peak, but that might be a good thing because it then becomes very elite and very special,” he said.

The Tradewise Chess Festival was important for a number of reasons: “It is so good for Gibraltar and puts Gibraltar on the chess map.”

Commenting on the many stories in the press about how the festival is getting bigger and better making it one of the most prestigious festivals in the world, he added: “Is that not fantastic for a small place like Gibraltar that a huge festival like this can take place here. There is also the influence on other people, like our young players, for example Stephen Whatley and others. Stuart Conquest’s appointment as the first professional chess person on the Rock who will go into schools and get young people to play is just a great initiative. So it is great for Gibraltar and great for the people here.” 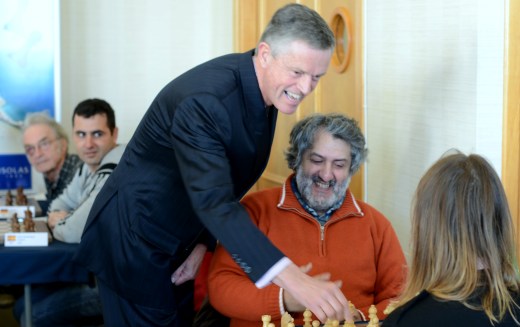 At the end of his visit James Humphreys from Tradewise, the festivals main sponsor, presented the Governor with a First Day Cover of the chess stamps issued last year for the 10th anniversary edition of the Tradewise Chess Festival.