The Glen Stark affair continues to puzzle the shocked chess world and has become a Pandora’s box which has just gotten a major upgrade. It results that Glen Stark is the virtual hand of Kirsan Ilyumzhinov for over an year and that his appearance on the chess scene started off on the wrong foot. His first appearance was wack in March-April 2017, “Glen Stark” phoned FIDE Vice President Ms. Beatriz Marinello in a threat-like manner, just a few days before he was announced by Kirsan.

May 5: Virtual candidate on Kirsan Ilyumzhinov’s ticket?
May 6: The chess world reacts to the Glen Stark case
May 6: Ilyumzhinov gets RCF support / Filatov says support may be revoked if ticket changes
May 8: The largest Norwegian newspaper on the FIDE elections and the Glen Stark affair

The hat tip for the information about the threats towards Beatriz Marinello goes to the esteemed chess journalist from The Telegraph – Leon Watson. In a reply via Twitter, Leon Watson points the striking appearance of Glen Stark in the FIDE minutes, about an year before Kirsan Ilyumzhinov announced his ticket.

At the meeting in question, Ms. Marinello raised an important concern towards Kirsan Ilyumzhonov. “The previous week she [Ms. Marinello] was contacted by someone named Glen Stark, he called several times and sent her email. He was saying he is the person in charge of Kirsan Ilyumzhinov’s fund […] She asked him to introduce himself and he said his name is Glen Stark, that he is a citizen of the United States, that he sent her an email, and that he is human.” When Ms. Marinello asked for a little more information, Glen Stark’s tone apparently changed and he started rising his voice and becoming aggressive over the phone. 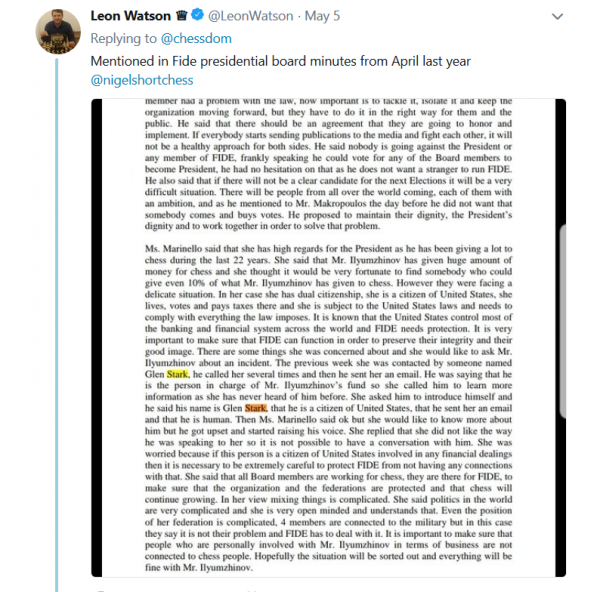 Mr. Leon Watson was keen to note the shocking appearance of Glen Stark over an year before joining the ticket of Kirsan Ilyumzhonov.

Beatriz Marinello spoke on the case in her Facebook profile. Chessdom.com also got in touch with her and an interview will appear soon in this article.

“Back in April 2017, I received an email from Glen Stark indicating that Kirsan Illyumzhinov gave him my email and he wanted my opinion about something. I thought this a bit peculiar to say the least. So, I sent Glen Stark the following email: “Could you please introduce yourself? I have no idea who you are.”

Then, I answered his phone call and when I insisted in knowing who he was, he got defensive and was very rude to me on the phone. Considering his heavy English accent and way of talking, I think he is Russian or East European. Now I see this article, my instincts were correct there was something strange about this person,” said Beatriz Marinello on Facebook. 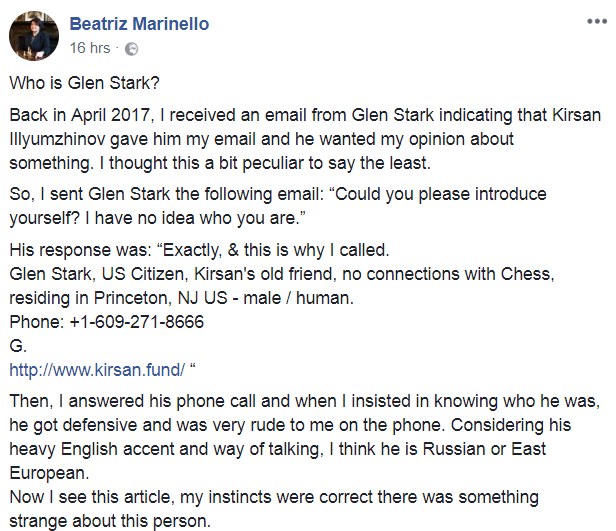 Just a few days after the phone call to Ms. Marinello, Glen Stark appeared again, this time as author on the official website of Kirsan Ilyumzhonov. There he said, “In 2016, we registered a charitable foundation “Kirsan Fund” in the United States, and in early April this year, the headquarters of the charity foundation “Kirsan Fund” was opened in Washington, DC, USA. The work of the foundation will cover North and South America.
The new organization will promote such chess projects as “Chess in Schools”, “Chess in villages”, “Chess in families” and “Chess for people with disabilities”” signing the article Glen Stark Kirsan Fund President & CEO

A fake person Glen Stark with a fake CV – is this what Kirsan wants to teach to “Chess in Schools”?

The story gets deeper, as Glen Stark – a person with apparently a fake name and CV – has been introduced by Kirsan Ilyumzhinov as member of his ticket and candidate for the very important position of General Secretary of FIDE. This was presented even to the Russian Chess Federation where he got a preliminary support from last Sunday, and which might become a whole different story at the Ministry of Foreign Affairs meeting, as Andrei Filatov points.

If it were any other person than Kirsan Ilyumzhinov, we would have no second thoughts on using the -gate suffix in order to show the severity of the Glen Stark scandal. However, the controversial FIDE President has faced several unpleasant incidents in his long political career (mostly outside chess) and during this pre-election period proves that we can expect almost anything from him and his campaign team.

The US Sanctions are an unfortunate turn of events that prevents Ilyumzhinov from doing any business or financial operations connected directly or indirectly with residents of USA. However, having a person with fake name and CV as head of Kirsan’s main organization is a serious problem that could lead to the ultimate downfall Kirsan Ilyumzhinov, thus quite impossible not to regard this story as #KirsanGate.

Glen Stark on Kirsan’s ticket is a generic name, as generic as the stock image and template CV that he uses in it. Following on the revelations by Chessdom.com, many people tried to call directly the phone of Stark and got an automatic reply. It was Peter Doggers from chess.com who managed to get through with the help of the FIDE Ethics Commission member Willy Iclicky – the first person to officially have Stark’s phone number. In the phone call Stark once again confirmed he is real (just like he noted to Marinello that he is “human”) and revealed that his name is “Gary”. This has been followed by a comment about his CV, claiming that “Everything is legit”.

But no, everything is not legit and more and more information has comes to Chessdom editors on a daily basis. Expect a major update with bombastic information in the next hours on Chessdom.