Initially we called it the Glen Stark affair, but after the most recent findings this has to be promoted to #KirsanGate. It took some time and lots of effort of our investigative journalists, but now we are confident that the pieces of the #KirsanGate scandal are coming together. A huge scandal of FIDE’s President Kirsan Ilyumzhinov himself and of his struggling efforts for a re-election bid on October 3rd during the Chess Olympiad in Batumi.

This scandal now goes beyond any expectation. The most recent findings rise even more questions about the tactics of Mr. Ilyumzhinov that require answers. Are the rest of the ticket members aware of the multiple identities of their co-candidate? Is the Russian Chess Federation aware for this defaming situation? Is #KirsanGate going to affect Mr. Kirsan Ilyumzhinov’s decision to run as a FIDE President?

The name of Glen Stark first came into the chess world in a phone conversation with Ms. Beatriz Marinello, where he introduced himself as the “CEO of Kirsan Fund”. The Kirsan Fund has been registered in Wyoming, USA and Chessdom.com has obtained a copy of its articles of organization, as approved by the State government of Wyoming, USA. In page 1 it is written that the entity will be managed by its only member named Igor Shinder, resident of 110 Lowell Ct., Princeton, New Jersey. In the whole registration the name “Ilyumzhinov” has been strategically avoided as he is under US Sanctions. As expected no Glen Stark is mentioned either. 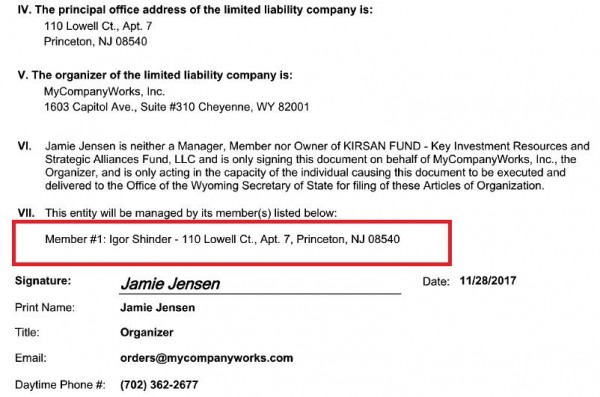 The name of the registered agent of the Limited Liability Company is MyCompanyWorks, Inc. with address 1603 Capitol Ave Ste 310, Cheyenne, WY 82001

Now here is where things get more interesting: As you can see from an online profile of Igor Shinder on Google his date of birth is mentioned as 27.09.1966 which is exactly the same birth date of “Glen Stark” in his Russian-language CV

Igor Shinder, a man of thousand names, one of which is Glen Stark 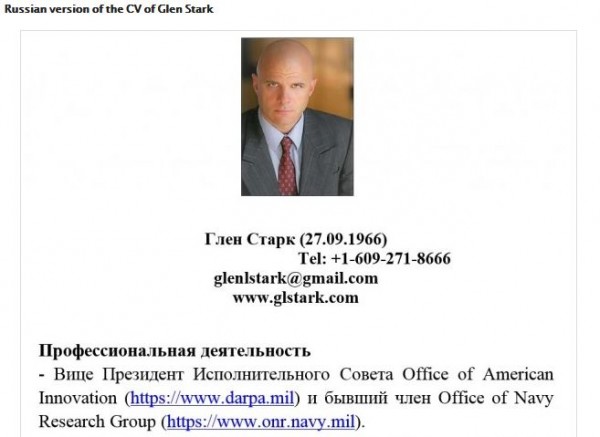 Coincidence of birth dates of Igor Shinder and Glen Stark

Unless there is a serious crime of identity theft performed by the people who registered or ordered to register the “Kirsan Fund”, it is more than obvious how the common birthday (27.09.1966), the common town of residence (Princeton, NJ) and the connection of both to the “Kirsan Fund” direct us to the conclusion that Igor Shinder and “Glen Stark” are the same person.

In May 2015 the Budva Investigation discovered the existence of a private company in USA, with the name European Union LCC, which was using the name and making deals as if it were the original ECU. It turned out that a significant amount of money was siphoned to the fake ECU during the leadership of Danailov which led to criminal complaints and severe problems for the Bulgarian Chess Federation.

Timeline of the fake ECU:

Now another fake comes out of USA and surfaces with the name of Glen Stark and fabricated CV. It is rather striking how many similarities this scandal has with the recent scandal of the fake “European Chess Union LLC”. Both entities registered in USA and both entities associated publicly with fake names. Is it only a coincidence that Silvio Danailov, currently investigated for the fake “European Chess Union LLC”, has tweeted that he knows Glen Stark personally? Is it another coincidence that the only chess related tweets that Glen Stark posts are the tweets of Silvio Danailov? And is Glen Stark i.e. Igor Shinder the missing link in the mysterious unexpected handshake between Kirsan Ilyumzhinov and Silvio Danailov? This certainly looks like another important piece of the #KirsanGate puzzle. 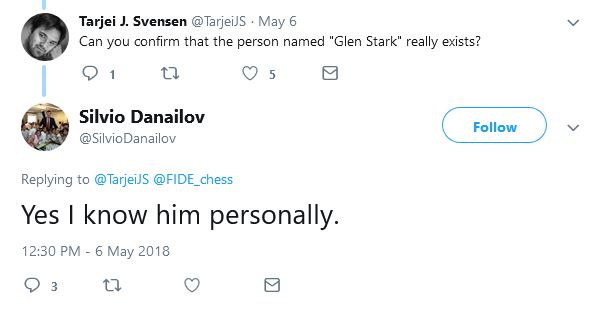 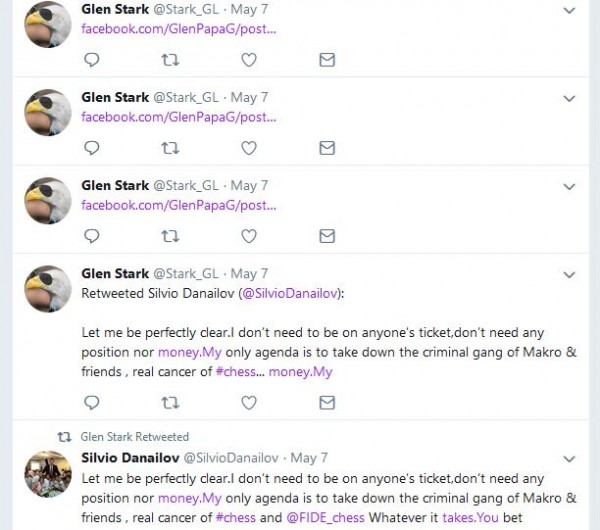 Glen Stark only tweets related to chess are from Silvio Danailov

If there is no crime of identity theft, there are plenty of explanations that the chess community, and very possibly the FIDE Ethics Commission, deserve.

Why has all this drama with fake names and fraudulent characters been produced by Kirsan Ilyumzhinov and his election team? Possibly to convince the other members of Kirsan Ilyumzhinov’s ticket that he has US supporters and the US sanctions do not affect him? Or to create a US corporate structure, with chess in the background as an excuse, in order to bypass illegally the US sanctions?

We will also contact MyCompanyWorks Inc., the organizing agency of the “Kirsan Fund”, and Bank of America for their opinion as these companies might also have to defend themselves, either in the case of identity theft or in the case of a group structure trying to abuse the US corporate and banking system in order to bypass the US sanctions.

#KirsanGate is a developing story, more is coming in the next hours