Qatar’s Grandmaster (GM) Mohammed Al-Sayed held on to the lead by the slimmest of margins after he settled for an uneventful draw with the UAE’s Fide Master (FM) Saeed Ishaq in Monday night’s seventh round of the 3rd Arab Elite Chess Championship – Kirsan Ilyumzhinov Cup, at the Sheikh Saeed Bin Hamdan Al Maktoum Hall of the Dubai Chess and Culture Club. 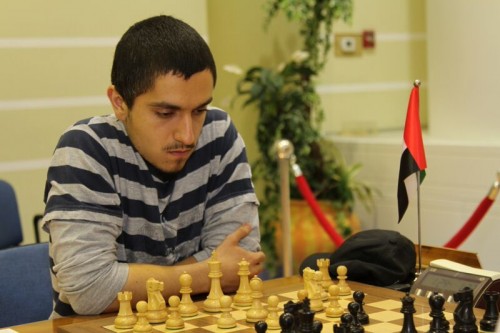 Ishaq played the Samisch variation against Al-Sayed’s King’s Indian Defence, but the game later transposed into a Modern Benoni Defence with both sides trying to create piece activity on both sides of the board. After Ishaq completed his development with the typical Benoni rook lift from the a1-square to a3 and finally to b3, Al-Sayed seemed to have ran out of counter-attacking ideas as he started to repeat moves. Both of Al-Sayed’s rooks were tied up for the defence of the queenside pawns and his minor pieces had to keep an eye on the potentially weak isolated pawns in the kingside, giving Ishaq all the trumps with his space advantage and better pawn structure.

However, the Emirati’s penchant for getting into serious time trouble reared its ugly head, as he used up copious time trying to find a good way to consolidate his advantage. With less than ten minutes left on his clock, Ishaq decided to let the tournament leader off the hook and agreed to a draw by repetition on the 30th move.

Al-Sayed remains at the top of the standings with six points, half a point ahead of top-seed GM Bassem Amin of Egypt, who nearly squandered a sizeable advantage before his Tunisian opponent, FM Amir Zaibi, self-destructed with a catastrophic endgame blunder.

Ishaq, who is looking to secure a GM norm at the event, maintained his hold of the fourth spot with 4.5 points.

Amin employed the Closed variation against Zaibi’s Sicilian Defence and quickly secured a comfortable structural and material advantage. But the Egyptian inexplicably exchanged two minor pieces and a pawn for Zaibi’s rook, giving the Tunisian decent chances to hold the draw. Zaibi, however, returned the favour when he left his knight en prise on the 36th move, which the Egyptian quickly spotted prompting the Tunisian to resign on the next move. 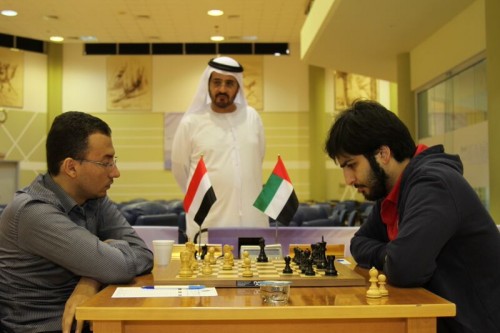 Second-seed GM Salem AR Saleh of the UAE failed to keep up the pressure on Al-Sayed as he was held back by a draw with International Master (IM) Basheer Al Qudaimi of Yemen. Al Qudaimi decided to trade queens early against Saleh’s Grunfeld Defence, but the exchange gave the Emirati ace player an opportunity to seize the initiative with a central break, exposing the weakness of Al Qudaimi’s uncastled king and lack of development.

After a series pawn and piece exchanges, white was left with an isolated d4-pawn, while his king remained stuck in the centre, providing plenty of targets for Saleh’s rooks and minor pieces. Saleh, however, choose a faulty plan that gave the Yemeni enough time to whisk his monarch away to safety and trade off his weak d-pawn for black’s c-pawn, achieving complete equality in the process. Both players signed the truce on the 31st move.

Saleh, who climbed to second place in the previous round on the strength of three straight wins, dropped to third with five points. Al Qudaimi has four points and shares fifth place with Moroccan IM Abdelaziz Onkoud, who was likewise held to a draw by Sudan’s Candidate Master (CM) Ahmed Abuzied.

In other matches, fourth-seed GM Mohamed Haddouche of Algeria rediscovered his winning touch after being limited to just half a point in his last four games, beating Saudi Arabia’s FM Hamoud Al Nhier in 37 moves of a Ruy Lopez Opening. IM Sami Khader of Jordan rebounded from a loss in the previous round with a win over Libya’s FM Ali A. Elmejbri. FM Husain Ayyad of Bahrain won over Palestine’s Abdelkadei Sharabaty, while FM Ahmed Abdulsattar Abdulwahhab of Iraq and Oman’s Ali Shamas Salim Issa drew their game.

Al-Sayed will have the black pieces against Onkoud at the top board in the eighth round, while Amin and Saleh will have relatively easier assignments in 11th-seed Abuzied and 14th-seed Al Nhier respectively. Ishaq will continue his quest for a GM norm as he meets Al Qudaimi on board four. 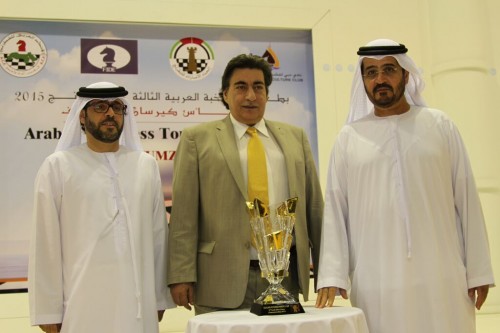 It was also announced that Fide President Kirsan Ilyumzhinov will arrive from Moscow on Wednesday morning to award the prizes to the winners during the awarding ceremony in the evening at the Dubai Chess and Culture Club. He will be joined by Makropoulos, Fide CEO Jeffrey Borg and senior sports officials in the UAE, including representatives from the Dubai Sports Council.