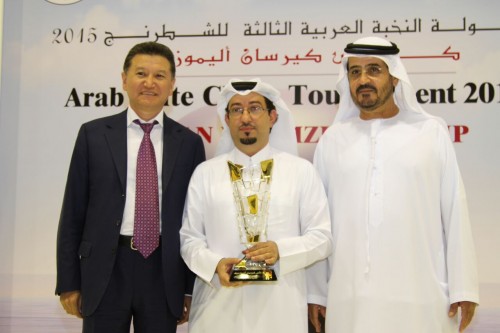 Grandmaster (GM) Mohammed Al-Sayed of Qatar came close to losing his first game in the tournament, but Algerian GM Mohamed Haddouche misplayed the endgame to allow the Qatari to save the draw and formalise his claim of the 3rd Arab Elite Chess Championship – Kirsan Ilyumzhinov Cup with an unbeaten slate.

Already assured of winning the title regardless of the results in the final round, Al-Sayed missed a tactical shot in the middlegame that allowed Haddouche to wrest the initiative and eventually win a pawn on the 27th move. But the Algerian, handling the black side of an Old Indian Defence, failed to follow through accurately as Al-Sayed created enough counterplay to force Haddouche to return the pawn and steer the game into an equal rook endgame with opposite-coloured bishops on each side. The players agreed to a draw on the 59th move.

The third-seeded Al-Sayed won the tournament with 7.5 points on six wins and three draws, half a point ahead of second-seed GM Salem AR Saleh of the UAE and top-seed GM Bassem Amin of Egypt, who finished second and third respectively.

Amin had to work harder against the Scotch Gambit of Bahrain’s FM Husain Ayyad. The Egyptian hung on to the gambit pawn until around the hallway point of the game when he allowed a series of exchanges that would have led to an equal position, with each side having a rook and opposite-coloured bishops. But Ayyad opted to maintain the tension, allowing Amin to hold on to the extra pawn in exchange for keeping his two bishops on the board. The Egyptian top-seed demonstrated a serious flaw in Ayyad’s plan as the extra pawn proved to be decisive in the 49-move win.

Saleh, winner of the inaugural edition of the tournament in 2011, finished second by virtue of a superior tiebreak score, relegating Amin to third place.

Ilyumzhinov, on the other hand, congratulated Al-Sayed for his victory and promised to continue to support the development of chess in the Arab region. He also lauded the Dubai Chess and Culture Club for successfully hosting the tournament.