At the end of 10th round of 4th Mayor’s Cup International Chess Tournament 2011, organised by Venus Chess Academy, co-sponsored by LIC and hosted by Goregaon Sports Club, Aleksandrov Aleksej (ELO 2618) of Belarus is marching towards the maiden title of the Champion with nine points way ahead of others with a whole point lead.

The game between him and IM M S Thejkumar (ELO 2450) started in Queen’s Gambit Declined Ragozin Defense. With the pieces getting exchanged at regular interval the endgame with bishop and knight on both side came only in 35 moves where both the players were having equal chances.

Thejkumar missed a possibility of exchanging the knights to get the opposite color bishop endgame. Aleksej then captured a pawn which allowed him two passed pawns and Thejkumar resigned after 54 moves. Now even a draw in tomorrow’s round will make Aleksandrov a Champion of the tournament. 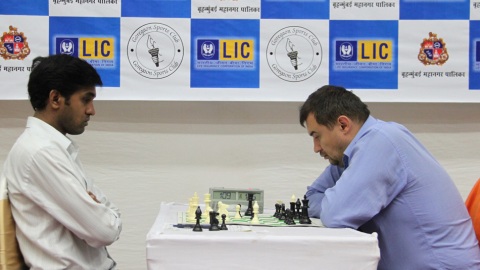 On the 2nd board GM Kravtsiv Martyn (ELO 2583) of Ukraine playing white opted for Spanish opening against GM Dzhumaev Marat (ELO 2492) of Uzbekistan. Marat replied with Jaenisch Defense. On 10th move Martyn denied castling to his opponent forcing him to keep the King in the center.

Then there was a fire on all over the board with both playing aggressively for victory. On 29th move Marat captured a pawn with a Rook, which was a blunder giving a decisive advantage to his opponent and resigned in 38 moves.

GM Deep Sengupta (ELO 2572) and GM Neelotpal Das (ELO 2458) agreed for a draw in the game of Sicilian Defense Maroszy bind in 18 moves.