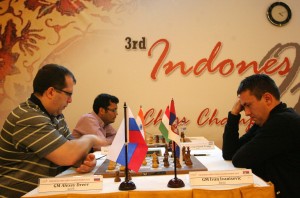 GM Alexey Dreev is the sole leader of the Indonesia Open Chess Championship (IOCC) 2013. After 7 round he is on top with 6,0/7. GM Alexey Dreev prevailed in his game against GM Ivan Ivanisevic, which brought him to the first position that he managed to keep today. Here is an interview with GM Dreev after the game with GM Ivanisevic.

You are now the tournament leader, how is it to be number 1 in the standings?

I cannot call myself number one as I have only played five rounds and there are six more to go.

Before, what was your target at IOCC?

I wanted to play well.

You are known as a player with just one opening. Is that true?

No. I just happen to play the same openings a lot, but not just one variation alone. I play different opening variations.

After IOCC, are you playing any other tournaments?

I will play in the European Chess Club Cup 2013 held in Rhode Island, Greece from 19-27 October. So from Jakarta, I am going straight there to represent my club. After that I will return to Russia. We have already prepared our team.

There will be a World Chess Championship 2013 between Viswanathan Anand dan Magnus Carlsen next month. What is your prediction?

Anand is motivated and Carlsen is also very strong. Both are great players and have chances.

How do you find Indonesia?

I have never been to Indonesia before. So I would like to see many things and gone to interesting places. But now I have been unable to because there is no time so I have spent all my time in the hotel. Maybe next time I will have the chance.