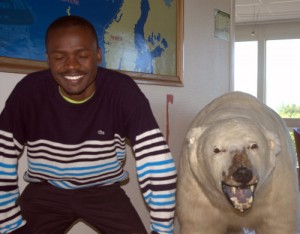 GM Amon Simutowe, the first Grandmaster from from sub-Saharan Africa, is the top board for the team of Zambia for the 2012 Chess Olympiad in Istanbul. He believes Zambia has an experienced side capable of challenging for honors at the World Chess Olympiads.

Simutowe, who is currently in the United States, said if the players are focused, Zambia would achieve good results. “I think the players will do well. They all have experience and no-one is really new. Players like Chumfwa and Nase qualified to be in the team despite their significant working commitments,” the first sub-Saharan African GM said.
Simutowe said Chumfwa and Lungu’s level of concentration during the preparations will determine their display at the tournament in Turkey.

“For Chumfwa and Nase, their performance will mainly depend on their concentration levels. The other three players – Daniel, Gillian and Andrew-seem to have relatively less demanding commitments.

“At least four out of the five representatives should be in good form for the team to produce a good result. I think the team has a good chance of repeating the 2010 performance and I can only wish them luck,” Simutowe said.

On the women team, Simutowe commented, “I wish the women luck as well. Unfortunately, I have not had a chance to look at their games but we certainly don’t have a shortage of good players in Zambia.”

In 1994 Simutowe won the nation’s under-21 championship, later he caused a mild controversy when he was heard calling the reigning Zambian champion “weak.” The Zambian champion then defeated Simutowe in their next chess encounter, but Simutowe was still not impressed and would get revenge by winning the National Championship at age 13 in 1995. Later that year he went on to participate in the African Junior Championships where he took fifth place.

He earned the IM title at the 1998 African Zonal (zone 4.3) with the required 66% score and later went on to win the first of his two African Junior Championships in 1999 by 12/13 followed by an 11/11 score in 2000 during which he earned the moniker, “The Zambezi Shark” and became famous for repeatedly defeating his competition in Fischer-like fashion, winning tournaments by ridiculous margins. He also carried the Zambian flag abroad in the 2000 under-16 championship and beat Iran’s Essam Ghaem Maghami who would later become a Grandmaster.

He then scored several notable tournament victories, including a tie for second place at the 2000 World Junior Chess Championships in Armenia where he scored 8½/13. He scored 6½/11 in the British Championship including a beautiful win against IM Colin Crouch. He represented Zambia at the 2000 Chess Olympiad in Istanbul, Turkey and scored 8/10 on board one. For his effort, he earned a silver medal, two GM norms (2000 Olympiad, 2000 African Championships) toward the three to become an International Grandmaster and was named Zambia’s “Sportsman of the Year” in 2001.

In 2002, he moved to the United States to pursue higher education after being awarded a chess scholarship. While a student at UTD, he helped the chess team win two national collegiate championships.

After earning a degree in finance and economics with high honors in December 2006, he embarked on a path to earn his final Grandmaster norm. After playing a number of tournaments in the U.S., he traveled to the Netherlands to compete in the 2007 Euwe Stimulus tournament, where he earned his third GM norm, and was awarded the International Grandmaster title. Later in 2009, he won the South African Open.