The tournament’s big guns avoided the catastrophic results of the first round as 38 players remained unscathed, including 10 of the 12 highest-rated seeds, after Tuesday’s second round of the 19th Dubai Open Chess Tournament–Sheikh Rashid Bin Hamdan Al Maktoum Cup at the Dubai Chess and Culture Club.

Second-seed Grandmaster (GM) Alexander Areshchenko of Ukraine posted his second straight point after an instructive 58-move win over India’s GM R. R. Laxman. Areshchenko, playing black, outplayed Laxman in the middle game of their Exchange Grunfeld opening, before finishing with a flourish, giving up a piece to create passed pawns on both flanks, which proved more than enough to handle for Laxman’s sluggish knight. 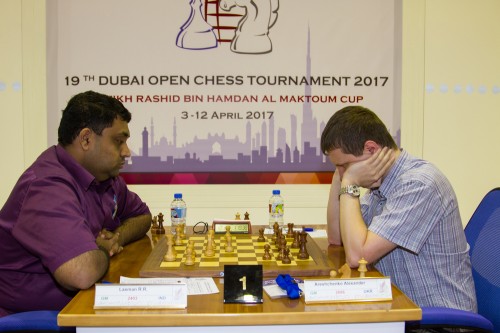 Sargissian and Rakhmanov, however, had to work harder than their peers in the elite group of grandmasters after grinding out wins in the endgame over IM Roy Prantik of India and IM Mohamed Tissir of Morocco respectively. Rakhmanov sacrificed a pawn to gain control of both flanks of the board with his bishops and mobile rook, but Tissir defended well until the Russian found an opportunity to liquidate into a rook and bishop ending with a dangerous passed pawn in the h-file. With Rakhmanov’s pawn just two squares away from promotion and in mutual time scramble, Tissir missed a beautiful, study-like motif that would have saved the draw by perpetual check – although the idea was difficult to find, much less with very little time.

Sargissian likewise had to push hard in a knight-versus-bishop endgame, capitalising on minor inaccuracies by his Indian opponent to unleash the long-range power of his bishop and eventually win following another attractive puzzle-like bishop sacrifice that set-up Prantik’s king in a mating net.

Some of the fancied grandmasters, however, were held to draws, including third-seed GM Eltaj Safarli, who had to suppress a dangerous attack by IM Padmini Rout of India. The game ended in a draw by perpetual move on move 36, dropping both players half a point behind the leaders with 1.5 points each.

The UAE’s Fide Master (FM) Saeed Ishaq remained on track in his quest for a grandmaster norm after holding 14th-seed GM Mykhaylo Oleksiyenko of Ukraine to a draw, which also gave him 1.5 points after two rounds. Ishaq defended well to save an inferior position in another endgame battle, which featured a rook and knight for both sides, with pawns on either flank. After mutual inaccuracies by both sides, Ishaq was able to liquidate to a rook ending a pawn down, which he managed to hold despite playing on increments.

Other highly rated players who conceded draws were 15th-seed GM Ivan Lopez Salgado of Spain with FM Ahmad Ahmadzada of Azerbaijan, 17th-seed GM Sergei Zhigalko of Belarus with Sidhant Mohapatra of India and 20th-seed Benjamin Bok of The Netherlands with IM V Rajesh of India.

The biggest casualties of the round were 36th-seed German GM Jan-Christian Schroeder, who lost to Woman International Master (WIM) Tijana Blagojevic of Montenegro, and GM Athanasios Mastrovasilis of Greece, who dropped his match to Candidate Master (CM) Gukesh D of India.

Top-seed GM Anton Korobov of Ukraine, who suffered an upset to 109th-seed Vusal Abbasov of Azerbaijan in the first round, rebounded with a win over Woman Fide Master (WFM) Gozel Atabayeva of Turkmenistan, while the UAE’s GM Salem AR Saleh bounced into the win column with a victory over India’s Dushyant Sharma.

Abbasov, meanwhile, continued to show fine form with a draw with IM Nitin S. of India. Eleven-years-old V Pranav of India, Saleh’s conqueror in the first round, was stopped in his tracks by compatriot IM Tania Sachdev, the tournament’s highest-rated woman player.

Among the Arab players, GM Ahmed Adly joined Amin in the leaderboard with a win over India’s Mary Ann Gomez, while IM Ibrahim Sultan won over Russian Kurus Artem to earn his first point. 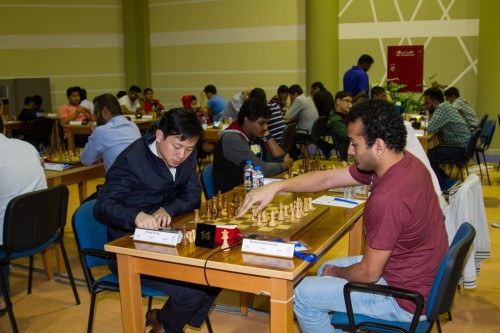 The second round also saw the longest game of the tournament so far. Untitled Siddharth Sabharishankar picked up a draw after five hours of play with compatriot IM N. R. Visakh.

Organizers said many players have already registered for this Friday’s blitz tournament, which offers a total cash purse of US$4,000. The tournament will be for 11 rounds, with each playing allotted three minutes plus a two-second increment per move.
The Dubai Chess Open Tournament offers a total cash purse of US$50,000, with the champion receiving US$13,000 and custody of the Sheikh Rashid Bin Hamdan Al Maktoum Cup.