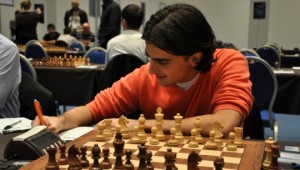 GM Danyyil Dvirnyy is the 2015 Italian Champion after an exciting three-way tie for first place.

The 12 round tournament was played from 30th of November to the 12th of December. After the conclusion of the rounds, there were three players tied at 7 points each – Danyyil Dvirnyy, Alberto David and Axel Rombaldoni.

The playoff was settled with a series of rapid 12 minute games with 3 seconds increment.

In the first game, Dvirnyy with black bested Rombaldoni. Rombaldoni won the second game with black over David. The third game David won with black once more over Dvirnyy, leaving the players tied again at 1 game each. The second set of games saw Dvirnyy besting Rombaldoni; David winning over Rombaldoni and tying with Dvirnyy. This knocked Rombaldoni to third place, while the other two players continued vying for the gold.

In the final playoff session, David and Dvirnyy each won one game with white, leaving them tied once more and leading us to an Armageddon round conclusion.

In the final game, Dvirnyy with white won over David and became the 2015 Italian Champion, leaving silver to Alberto David and bronze to Axel Rombaldoni.

This victory brings back the title to Dvirnyy. He was holder of the title in 2013 , but lost it to Rombaldoni in 2014.