Russian Rapid Grand Prix – Cup of Russia for rapid chess “Volgograd 2013”, dedicated to the 70th anniversary of the victory at Stalingrad, was held on 11-14th January at the Sports Palace in hero-city Volgograd, Russia.

The playing format was 11 rounds of Swiss system with the time control 15 minutes + 10 seconds per move.

Grandmaster Ernesto Inarkiev had a furious start with eight consecutive wins which allowed him to claim a clear first place with spare round. Inarkiev scored 10/11 points and collected the top prize of 1600 EUR.

There followed three players with 8,5 points each – Pavel Smirnov, Dmitry Bocharov and Dmitry Andreikin. Russian Champion Andreikin had no luck with Buchholz which deprived him of the bronze medal. 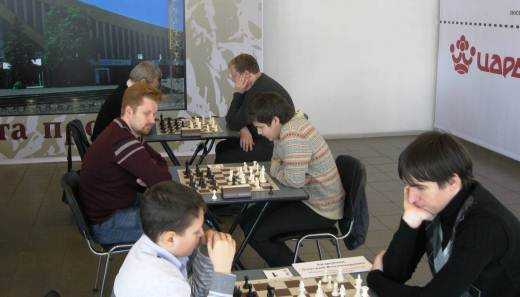 The 15-years old Vladimir Zakhartsov (2370) from Rostov had the best tie-break in the group of ten players with 8/11 points each and grabbed the 5th place. Head of the family, Grandmaster Vyacheslav Zakhartsov, finished with the same points but landed 10th on tie-break.

Earlier in Volgograd, Grandmaster Denis Khismatullin held a simultaneous exhibition, while former European Champion Vladimir Potkin conducted a master class for members of the junior team of the Volgograd region.