Grandmaster (GM) Gawain Jones of the UK defeated GM Boris Savchenko of Russia in the final round to rule the Dubai Open Blitz Cup on Friday at the Dubai Chess and Culture Club. Jones overcome an early third-round loss of Egypt’s International Master (IM) Hesham Abdelrahman by scoring 7.5 points from the next eight games to claim the championship with 9.5 points. 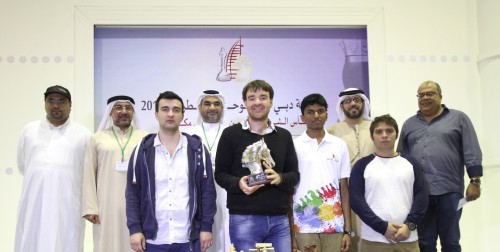 The Georgian GM Levan Pantsulaia defeated Asian champion Salem AR Saleh in the last round to claim the bronze with 8.5 points, half a point ahead of a big group of eight-pointers that tied for the fourth to 13th spots.

Kovalenko and Salem AR Saleh claimed the next two spots on tiebreak, while India’s Harsha Bharathakoti, rated only 2061 and seeded 74th, was the tournament’s biggest revelation by placing sixth ahead of dozens of highly rated titled players. 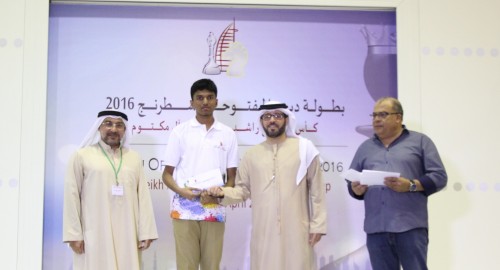 The top six placers received cash prizes during the awarding ceremony. The tournament had a total prize fund of US$4,000. Nearly 130 players from 32 countries took part in the tournament, including 25 grandmasters and 18 international masters.

The tournament was held during the rest day of the Dubai Open Chess Championship – Sheikh Rashid Bin Hamdan Cup. The Dubai Open resumes today (April 16) with the fifth round at 10 am and the sixth round at 6pm.