The 19th Voronezh International Chess Festival 2015 is currently in progress at the Voronezh Chess Club, in Voronezh, Russian Federation.

Igor Glek is a Russian chess Grandmaster who now competes for Germany. As well as this, he is a chess theorist, a coach, the President of the World League of Chess Tournaments and a co-founder of the ACP.

Igor has once again been one of the Voronezh International Festival competitors, although this year he only participated in the Rapid tournament. He shared his thoughts on the Festival with Elena Ponomareva. Interview was translated into English by Svetlana Lisik. 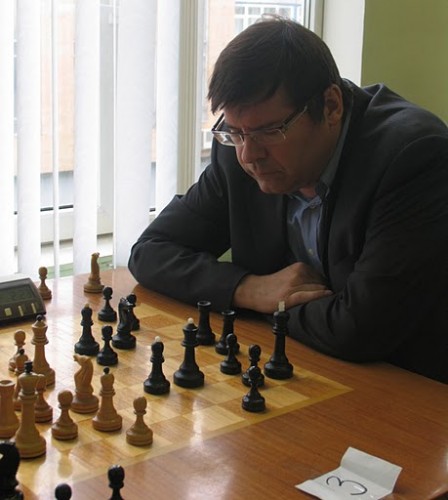 EP: Igor, this year you have come to our town again if only for a bit. Does the Voronezh Festival mean a lot to you?

IG: Last year I managed to take part in both the Rapid and Chess 960 tournaments. This year however, I have been quite busy so I could only come for one day to participate in the rapid one. However, there was no way I could miss it, it has become a tradition to come to Voronezh every year. Even if it is only for a day or two, I still feel like I have to come in respect of the President of the Chess Federation Sergey Rudakov and the local chess players who I have very good relationships with. I am always looking forward to all the positive emotion I get here.

EP: As for playing chess itself, how important is the Festival for you?

IG: I don’t really have any specific or ambitious goals. I work as a coach now so I’m more interested in my students’ results and success. By the way, a couple of them play here. As for me, I just play for pleasure. I don’t think I could handle a 9-day-long Master tournament now, whereas one or two days seems fine.

EP: You have participated in the Rapid tournament. How was it?

IG: It didn’t go too well at first. But in the second half I managed to catch up. Altogether, it wasn’t too bad and I became one of the prize-winners.

EP: This year the Rapid tournament has attracted even more players than usual. Would you say it is becoming more and more popular?

IG: Yes, there are a lot of participants, I think over a hundred (134 to be exact). Which I think is logical because this kind of chess is where the future lies.

EP: You have already said that for you coming to Voronezh is out of respect for the players and the city. Do you have any memories of the previous times you came here?

IG: I first played in Voronezh about thirty years ago. In 1984, I suppose. That was my first university tournament, we stayed at students halls and I played for the Moscow team. It was summer, like now, and it was really hot! From what I remember we played quite well, liked the city and everyone around was very friendly.

EP: Do you think you will come to Voronezh again?

IG: I hope so. While the Festival exists and my friends here play and organise events, I don’t see any reason why I wouldn’t. I would be happy to come again.

EP: The main tournament of the Festival is the 9-day-long Master Open. Any words for the participants?

IG: Well, there are about 30 GMs taking part in the Master Open and all of them are great players. Many young sportsmen have also done really well in the Rapid tournament. So it will be a tough competition where everyone has a chance to win!

EP: Chess players are the kind of people who plan everything step-by-step and know things in advance. Is it possible to predict the winner?

IG: Definitely not. People can make bets though (laughing) and the one who guesses correctly wins!