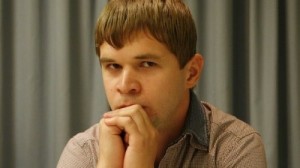 We are deeply sorry to inform, that today, 08.08.2013, the world has lost one of its most talented Grandmasters Igor Kurnosov. He was run over and killed on the spot by a car at 2:45 am in Chelyabinsk.

According to the local authorities, the car was driven by a 20 year old girl, with 1 year and 2 months driver experience. The car hit two pedestrians, the 28 year old Igor Kurnosov lost his life, while a 42 year old man is in hospital in critical condition.

Our condolences to the family and friends of GM Igor Kurnosov.

In memory of GM Igor Kurnosov

Igor Kurnosov was born 30 May 1985 in Chelyabinsk. In the latest FIDE rating list GM Kurnosov was 20th among the Russian Grandmasters with rating of 2662.

His last major tournament victory is the Abu Dabi Chess Masters. He also won this year’s Nakhchivan Open 2013. One of his most memorable victories was in Politiken Cup 2011, where he finished with 8,5.