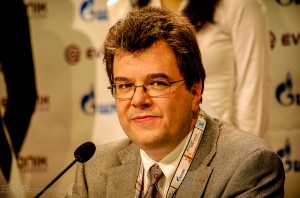 GM Klaus Bischoff (2494) wins the 86th German Championship title after tiebreakers. The event took place in the Hermann-Neuberger sports school in Saarbrücken. It was 9 round swiss event with 36 players.

8th seed Klaus Bischoff scored 6.5 points in 9 rounds of play, just as much as 4th seed GM Vitaly Kunin, but Bischoff won on tiebreakers. The bronze went to IM Rasmus Svane. Bischoff reclaimed his title from 2013, after dethroning Daniel Fridman, who won in 2014.