The Cuban Lazaro Bruzon has proclaimed this afternoon in Bilbao, the new Ibero-American chess champion after ending in a tie with the young talent Alan Pichot in a direct duel, in this last day. The Cuban has not suffered too much in this game because the Argentinian soon accepted the fact of ending in a tie.

This result has disrupted the final standings: Pichot, who have had the option to win the championship, was then put into fourth place after the tie. While the Latin-American 2008 champion, Julio Granda has passed over him and obtain the second post in the championship, after winning his game against the Argentinian talent, Peralta. To establish the final resume, the main referee Alvaro Soto, has had to make estimates of the results achieved together by the players; because there have been up to five, who tied with 7 points, including the representative of the Basque chess, Gabi Del Rio, who has finally been better local chess.

On the last day of the  6th Ibero-American Chess Championship just half a point separated the Cuban and Argentina, first and second respectively in the standings. That difference is what allowed the Cuban obtain a draw with the black pieces and, on the contrary, pressing the 16 world runner-up champion, with the initial advantage of playing with white, victory over his opponent as sole a result that gave him the championship.

Before the start of the final match, specialists crossed bets on the final result, and the vast majority bet the outcome to be a tie, not by a statistical issue most likely result among players of similar level, but by the apparent sport dilemma which Pichot a priori struggled with: go for the winning of the match in order to get the victory, with the risk of losing, or play for tables, as it was the minimum result he needed to leave Bilbao today as International Grandmaster.

However, doubts were quickly dispelled by the Spaniard first move with which Argentinian stated a declaration of principles for a long game and decided to go against everything of his opponent, and his coordinated and organized black pieces; this technique is known in the Spanish slang as the “Spanish torture”, consisting of trying to go slowly undermining Bruzón´s defences.

The initial attack of the Argentinian was however weakened in around twenty moves, losing the initiative on the queenside, where he had focused its offensive. And from there, the game was mired as a resigned exchange of blows and pieces that led to the tie. With this result, Bruzón got for the second time, the Latin-American Title, and Pichot got the certificate of International Grandmaster, allowing him from now on, to get into the chess elite competing for the absolute world title.

Both recognized at the end of the decisive game that the result has been obvious because Bruzón was played, in his words, in a “peaceful” way, in order to ensure the tie, and Pichot has recognized that its primary objective by participating at the Ibero-American Championship, was achieving brilliant results that would lead him to obtaining the title of grand master, and so it proved.

With his victory today the Cuban Grand Master is the only chess player to have won twice the Latin American title, since it was also the first champion in the 2006 edition, which was also played in Spain. In successive editions of 2008, 2010, 2012 and 2014, the winners were the Peruvian Julio Granda, Brazilian Gilberto Milos, the Spanish Ivan Salgado and champion until today, the Paraguayan Axel Bachmann.

Born in the city of Holguin in 1982, the world junior champion in 2000, was also absolute national champion in 2004, 2005 and 2007. However, since that first win at the Iberoamerican distant 2006, in his sporting career Bruzón has been irregular up to his new victory today.

Despite his youth, the Bonaerenesen player (a province in Argentina), born in 1998, has had time, in addition to proclaim himself today as the Ibero-American champion, to win last year´s in South Africa World Cup as the 16th runner-up, and to become, at the age of 15, the youngest international chess master in Argentine history.

The great sporting disappointment has featured the Spanish chess player, Paco Vallejo, a priori the great favourite and finally disappearing anonymously half of the table away, despite the victory today against the Andorran player De la Riva, as a nice farewell.

The outcome of the Ibero-American Championships has been exciting to the very end, as was the VIII Final Masters Bilbao Grand Slam, which ended last Sunday and was also decided on the final day in the direct duel against the board confronted the American So and the Dutch Giri, and continued in an agonizing playoff definitely won by So.

So has taken the winning title of the after the final of Bilbao Masters Final to the five times world champion and current world runner-up, Viswanathan Anand. Before both of them, we can mention as Bilbao Masters Final two time champions to each of these players; the world number one and double world champion, Norwegian Magnus Carlsen, and double Olympic champion, Armenian Levon Aronian. In order to complete the list, we can mention the Bulgarian Veselin Topalov, who won the first edition in 2008 and his great rival and “intimate enemy”, Russian Vladimir Kramnik, who won in 2010.

The VI Iberoamerican Individual Chess Championship was played at the Champs Elysees Theatre of Bilbao since last October 26. The competition has been developed simultaneously with the VIII Final Masters Grand Slam, the other big event of the Bilbao Chess 2015, which ended two days ago, on Sunday, November 1, with the victory in the rapid games of the tie breaker of the US Wesley So against Dutch Anish Giri on.

Bilbao Chess 2015 ended today with the closing ceremony in which Lazaro Buzón has been crowned with a popular beret, a typical hat in the Basque Country for distinguished champions. Mikel Alvarez, coordinator of Mayor´s Cityhall and councilor for the City of Bilbao Organization, has been the one to give away the trophy.

As in previous editions, the two competitions have been streamed live on the Internet through the official website of the event, www.bilbaochess2015.com, and the main international portals of chess. 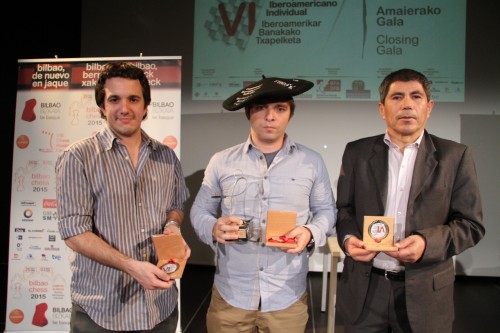