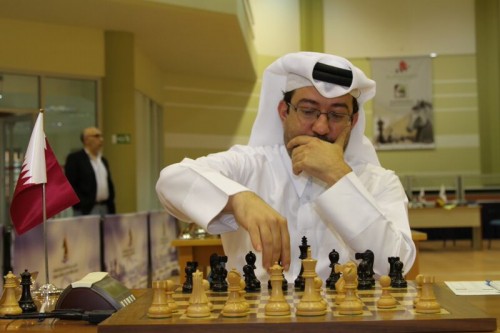 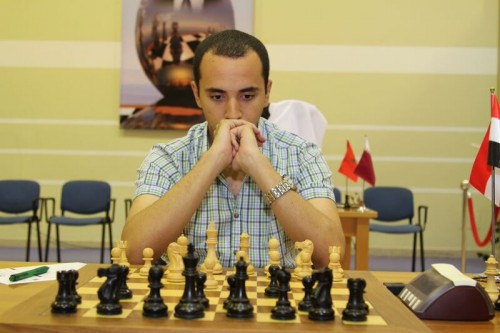 Al-Sayed’s superior tiebreak score ensures that he will emerge champion regardless of the results of Wednesday’s final-round matches. The third-seeded Qatari thus follows in the footsteps of his compatriot, GM Mohammed Al-Modiahki, who won the second edition of the biennial championship in 2013.

Candidate Master (CM) Ahmed Abuzied was the unheralded hero who helped Al-Sayed secure the virtual championship as the 11th-seeded Sudanese held Amin to a draw, which doused cold water on the Egyptian’s bid to overtake Al-Sayed in the final round.

Al-Sayed, who chose a solid formation with pawns on e6, d5 and c6 against the Moroccan’s English Opening, gradually outplayed Onkoud in the middlegame to gain a significant space advantage and build up a dangerous attack against the white king. Onkoud’s king started to feel insecure when one of Al-Sayed’s knights landed on f4 on move 24, although it was still unclear how the Qatari would marshal the rest of his troops to join the attack.

The Qatari nonetheless was in a rush and proceeded to sacrifice the knight two moves later to open the g-file and then transplanted his c8-rook to the g6-square, where it trained its heavy guns directly on the white king. With the queen and two bishops quickly joining the attack, Onkoud succumbed to the mounting pressure as he failed to spot the most stubborn defence, capitulating with an unfortunate knight move that allowed Al-Sayed to unleash a mating combination.

Playing the white pieces for the second time in a row, it was almost déjà vu for Amin as he faced another Sicilian Defence against which he again opted for the Closed variation. Similar to the drama that unfolded in the previous round, the Egyptian outplayed his opponent and then somehow lost the thread in the endgame, allowing Abuzied to get back into the game. But unlike in the previous round where Amin’s opponent imploded, Abuzied avoided any fatal mistake to secure the half-point after a gruelling 69 moves.

The UAE’s Saleh caught up with Amin at joint second place as he had an easier time disposing of 14th-seed FM Hamoud Al Nhier of Saudi Arabia in 36 moves of a Grunfeld Defence.

IM Basheer Al Qudaimi of Yemen overtook FM Saeed Ishaq of the UAE at fourth place after prevailing in their encounter. Al Qudaimi maintained a slight plus in the middlegame against Ishaq’s Sicilian Defence until the Emirati committed an elementary, albeit decisive, mistake on the 37th move, allowing a knight fork against Ishaq’s rook and queen.

In other matches, GM Mohamed Haddouche of Algeria defeated Tunisian FM Amir Zaibi in 40 moves of a Philidor’s Defence, IM Sami Khader of Jordan won over Ali Shamas Salim Issa of Oman in 110 moves, the longest in the tournament, of a King’s Gambit, FM Husain Ayyad of Bahrain beat FM Ali A. Elmejbri of Libya in 37 moves of a London System, and Abdelkadei Sharabaty of Palestine picked up his first win in the tournament at the expense of FM Ahmed Abdulsattar Abdulwahhab of Iraq.

Matches in Wednesday’s final round: Al-Sayed vs. Haddouche, Amin vs. Ayyad, Saleh vs. Khader, Abuzied vs. Al Qudaimi, Salim vs. Ishaq, Sharabaty vs. Onkoud, Zaibi vs. Elmejbri, Al Nhier vs. Abdulwahhab. Having missed his chance to secure a GM norm, Ishaq, as well as Abuzied, will be looking to secure IM norms with a win in the final round.

Meanwhile, International Chess Federation (Fide) President Kirsan Ilyumzhinov will award the prizes to the winners during Wednesday night’s awarding ceremony at the Dubai Chess and Culture Club. He will be joined by Fide Deputy President Georgios Makropoulos, Fide CEO Jeffrey Borg and senior sports officials in the UAE, including representatives from the Dubai Sports Council.