Nigel Short won the first Isle of Man International. “I am ecstatic. So pleased with my result,” tweeted the 49-year-old English grandmaster after finishing on 7.5/9, a full point ahead of the pack. 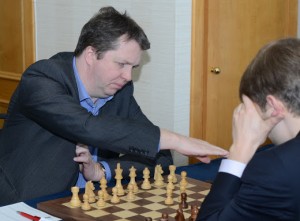 However, it was the very next player on the list who won the tournament, and played himself back into the top 100 along the way: Nigel Short of England. He scored an undefeated 7.5/9, a point more than the aforementioned Fressinet, Tiviakov, Howell and Israeli GM Gil Popilski.

Three draws and two wins was a rather modest start (well, for a tournament winner!) but then the machine started rolling. First it was the young Israeli GM Avital Boruchvsky who was punished for a miscalculation: