Playing on the first board Ravichandran faced a Sicilian defense, for which he opted for closed variation. Pieces were traded at regular intervals and the game ended in tame draw after 37 moves. 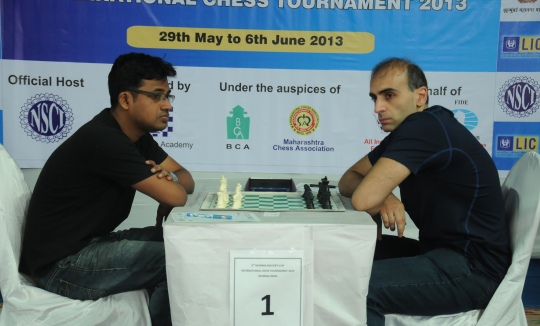 The game between the leader GM Pantsulaia Levan and GM Zubarev Alexander (ELO 2559) of Ukraine started with Reti opening which later converted into English opening. With regular exchange of the pieces Levan had a slight advantage with his Bishop against the Knight.

On 47th move Zubarev made a passive move of his knight which allowed Levan king to gain entry on the king side winning 2 pawns thus creating a passer. Realizing the difficulty in stopping the pawn Zubarev accepted his defeat in 58 moves.

Sameer Kathmale who could have made his IM norm today might have earned his maiden Grandmaster norm if he would have won the game but missed his chances as his opponent GM Andriasian Zaven (ELO 2608) of Armenia defeated him in the hard fought game of Frech Defense. 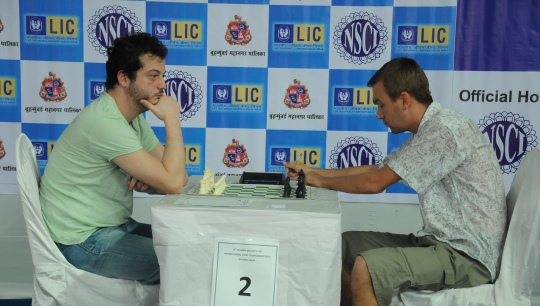 Sameer playing with white opted for Tarrasch variation and on 19th move created opposite color Bishop ending. But GM Zaven used all his experience to convert this drawish ending into win.

In the Under 2100, Ramkrishna Perumalla (ELO 2086) is jointed by Jalpan Bhat leading with 8 points, followed by V S Negi, Snehal Bhosale and Yogit S with 7.5 points at the end of the 9th round.