The 10th Chess Festival Sagaalgan 2012 was held on 16-18th March at the Buddhist University in Ivolginsky datsan, near Ulan-Ude in the Russian Republic of Buryatia.

The 13-round rapid tournament was a stage of the Rapid Grand Prix of Russia. An impressive number of 458 players participated.

Grandmaster Pavel Maletin (2586) from Novosibirsk took a clear first place with 11 points. Half a point behind the winner are Grandmasters Pavel Smirnov (2599), Anton Shomoev (2582) and Andrei Belozerov (2499).

A day before the tournament start, guest from Belarus, GM Aleksej Alexandrov, held a simul for twenty players.

Ulan-Ude is the capital city of the Republic of Buryatia, Russia, located about 100 kilometers southeast of Lake Baikal on the Uda River at its confluence with the Selenga. The city is the center of Tibetan Buddhism in Russia. 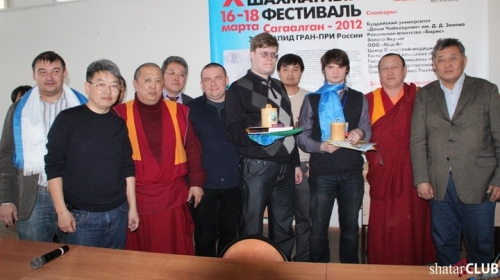