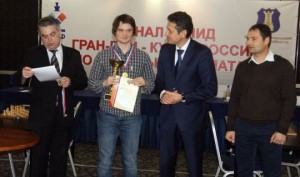 The final Rapid Grand-Prix 2014 – Cup of Russia was held on 13-16th December in Rostov-on-Don. The format was knockout tournament with 16 qualified players.

The time control was 15’+10”. Each match consisted of two games and in case of a tie there was an Armageddon blitz to decide the winner.

Pavel Maletin started the campaign with 1,5-0,5 win over Dmitry Bocharov and then in the next round eliminated the elo-favorite Alexander Morozevich by 2-1.

In the semifinal Maletin outplayed Sanan Sjugirov 1,5-0,5, while Riazantsev defeated Sergei Rublevsky with the same score.