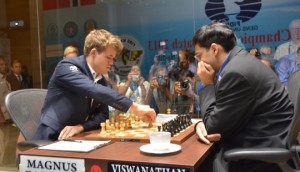 Grandmaster Sergey Smagin, Vice-President of the Moscow Chess Federation, believes that the FIDE World Championship Match in Sochi will not be an easy walk for Magnus Carlsen.

“I am convinced that this World Championship Match will not be similar to the previous one. This year Viswanathan Anand won two major tournaments, one of them being the FIDE Candidates. A broken Anand from Chennai will not make appearance in Sochi.” – Smagin said.

“It is difficult to estimate Anand’s chances, but the Match will not be an easy walk for Carlsen. Undoubtedly Carlsen is favorite, but he shows great respect for Anand and is extremely cautious. He goes to this battle with his visor on.”

“Anand is always playing with great enthusiasm in Russia. He likes it here and you can be certain that in Sochi he will feel at home. And this is also important.”

“In terms of talent and knowledge Anand is not inferior Carlsen, but he is 21 years older. Carlsen’s weakness is opening preparation, while Anand’s weak point is poor stamina.”

“Perhaps Anand will try to force the openings from where the games could finish around the time control. It this way he would avoid physical exhaustion and preserve the much needed energy.”