Playing against the Modern Defence of Algerian GM Mohamed Haddouche, Amin chose an offbeat line that involved a pawn sacrifice as early as the seventh move, but Haddouche responded with active play that allowed him to hold on to the material advantage without giving away any significant compensation to the white-wielding Amin. However, by move 25 Haddouche decided to go all in with an ill-timed attack to the kingside that was seriously lacking in firepower. The Egyptian top-seed defended accurately, forcing the Algerian to lose more material and eventually concede the game on the 33rd move.

Al-Sayed likewise benefited from a fatal oversight by local bet GM Salem AR Saleh, whose handling of the Grunfeld Defence had otherwise been sufficient to hold the fort, even giving the UAE player good chances on account of his more mobile central passed pawns and his blockade against white’s passed pawns on the a and b files. But Saleh inexplicably entered a variation that allowed the Qatari to win black’s rook for his dark-square bishop on the 34th move.

Saleh banked on the activity of his two bishops and central pawn majority while maintaining the blockade on the flank, but Al-Sayed found a way to roll his queenside pawns before finishing with a flourish by sacrificing a bishop and a rook to dismantle black’s central pawns and open the position for his other rook to assist the queenside pawns to the finish line. Saleh resigned on the 53rd move.

Amin and Al-Sayed will meet in the fourth of the nine-round tournament to dispute the solo leadership.

Haddouche joins a chasing pack of two-pointers occupying the third to seventh places, which includes tenth-seeded Fide Master (FM) Saeed Ishaq of the UAE, who, following an opening-round loss to Saleh, is back on track in his hunt for a GM norm with consecutive wins over Palestine’s Abdelkadei Sharabaty in the second round and Jordanian sixth-seed International Master (IM) Sami Khader in the third round.

Saleh dropped to a tie at the eighth to ninth places with  Elmejbri, who earlier held the UAE grandmaster to a draw in the second round. The second-seeded Saleh looks to regain lost ground in the fourth round against Abuzied. 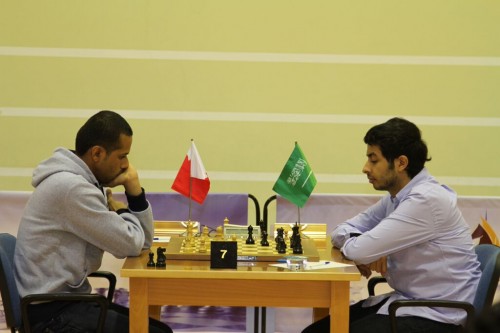 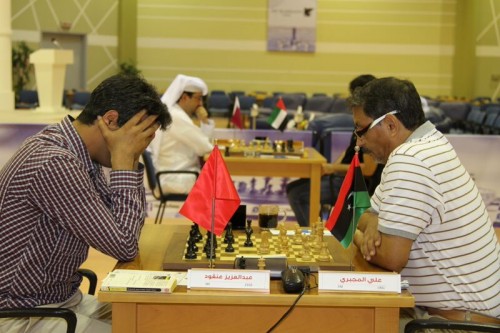