Grandmaster G N Gopal came up with his best defeating counterpart Tal Baron 4-0 to guide hosts to an emphatic 9.5-6.5 triumph over Israel in the first round of the India-Israel Chess match now underway at AAI Officers Club.

Indian mainstay Krishnan Sasikiran had an off day on the top board and so did National Champion Abhijeet Gupta but Gopal made up for it easily with his all round display in blindfold, rapid and blitz games. 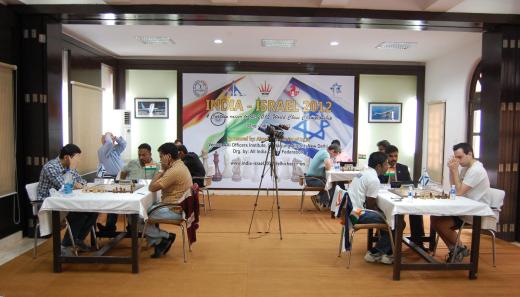 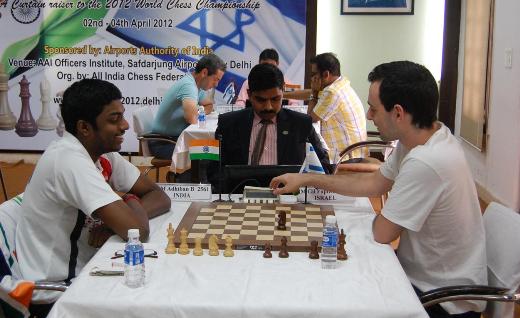 The Indian team started with a 3-1 triumph in the blindfold with Sasikiran having it easy against Yadael Stapek and Gopal showcasing his form against Tal Baron. Abhijeet was held to a draw by Vitaly Golod while Adhiban was forced to split the point against Gil Popliski on the fourth board.

In the rapid, top Israeli here, Ilya Smirin was back on the top board and drew with Sasikiran while Gupta was in for a shock as he lost to Golod. Again, Gopal and Adhiban saved the blushes for the Indians on the last two boards and the rapid match was won by 2.5-1.5 margin.

The Israeli team showed their true mettle in the first blitz match wherein Sasikiran and Abhijeet Gupta suffered defeats and the result was an Israeli victory with a minimal margin.

In the last blitz of first round however, the Indians bounced back to register a minimal victory thanks to the efforts of Gopal who was the lone winner besides three draws. 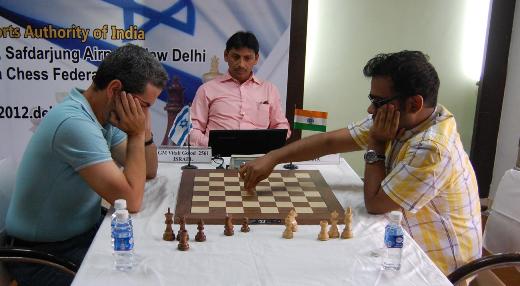 The match being organized as a curtain raiser to the next world championship match between V Anand and Boris Gelfand of Israel still has as many as 32 games remaining including eight blindfold, eight rapid and sixteen blitz games.

Sponsored by the Airport Authority of India, the match will end tomorrow and Indians remain firm favourite to annex the title barring a big comeback by the Israelis.

While Sasikiran had a 50% score, the form of Abhijeet Gupta might be a concern for the Indians as he could muster just one point out of four in the first round. Adhiban scored 2.5 points and did his bit in the opener. 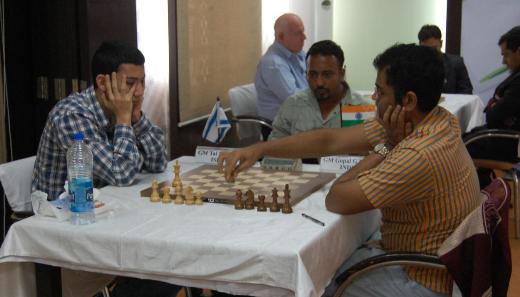 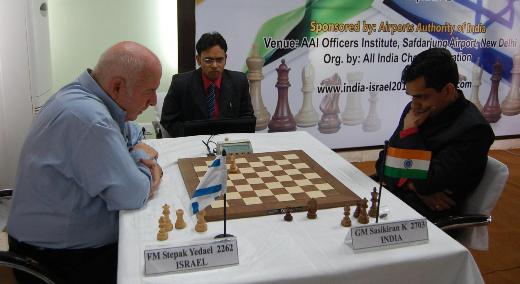 The match is being beamed live through the world wide web on www.india-israel2012.delhichess.com. Besides live transmission of the games, there is also a live webcam to see players in action in this unique match.