The 6-round Swiss event had three rating sections and guaranteed prize fund of $5000.

The 10th Annual Grand Pacific Open drew a blowout record 152 players from around the world: Brazil, France, 6 states and 7 provinces.

The player list was headed by pre-tournament favorite GM Alexandr Fier, IM Bindi Cheng, and a number of FMs, NMs, a WGM, and the usual suspects from the local BC chess playing scene. 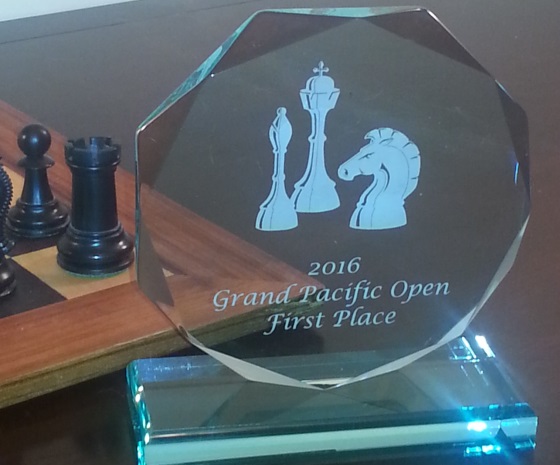 Players of a certain age will remember the Ross brothers, IM Dave and FM Paul, who apparently were using the GPO as a warmup event prior to their participation in this year’s World Senior Team Championship.

Although the clear favorite rating wise by a wide margin, GM Fier had his scored nibbled away by NM Robert Sasata with a round 3 draw and a round 5 draw with BC Champion Jason Cao. In the end, Fier tied for first with Cao and FM Kevin Gentes with Cao taking the trophy on tiebreak. Congratulations to Jason Cao!

The full standings for the main event

There were a number of side events starting with a set of simuls against WGM Nino Maisuradze and GM Alexandr Fier. As is the usual case in such events, the featured players scored heavily winning all but one of the games against the roughly 26 players with only Andrew Hempstapat holding a draw against Fier. 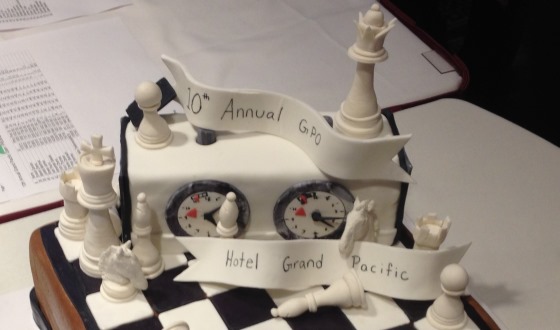 The ever popular Midnight Blitz drew what I think is also a record 43 players and was won by Becca Lampman with a perfect 8-0 score.

And as every year, the tournament closed out with a Bughouse tournament.

Finally, a big thank you to our sponsors, both corporate and individual donors, all of those who volunteered in some way, our head TD Mark S. Dutton, IA, side event TD Elliot Raymer, and supervisors for the lower boards Charles Huang and Robin Luo.