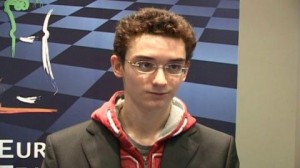 Day after day the Italian-American superstar Fabiano Caruana is making history. Fabulos Fabiano aka Fabi is now at 7,0/7 in the strongest ever chess tournament, the Sinquefield Cup, breaking every expectation, shattering even the bravest predictions.

With his victory in round 6 he surpassed the 5,0/5 start of Ivanchuk at Mtel Masters 08, with the victory today another achievement remains behind – the 6,0/6 of Karpov in Linares 1994. The modern times of chess have a new king, king Fabiano Caruana. One has to look back to 1968 where in Wijk Aan Zee the legendary Korchnoi started with 8,0/8. The times now are so different and the competition so fierce that already Fabiano’s success can be proclaimed as the most memorable streak in the history of chess.

Fabiano Caruana is out of this world! 7/7 and going for more. Congratulations @FabianoCaruana http://t.co/76LALWsQEO #SinqCup

What’s more, ice-cold Fabi has the chance to beat his own performance. In round 8 he will have the white pieces against the World Champion Carlsen. The most in form player vs the highest ever rated; the rising star vs the established star; the future World Championship finalist vs the current World Champion; a pure show guaranteed!

Join us for live coverage and triple engine analysis at 21:00 CET here on Chessdom.com

* “Grande! Mostruoso!” comes from a recent praising article for Fabiano Caruana in one of the biggest European sport papers Gazzeta dello Sport. Fabiano also entered the pages of the German TAZ (via Megalovic)